Rototilt’s social media competition #excavatorhero, which recognised the everyday hero, was a success, and the winners have now been selected.

“We want to put the spotlight on the real hero – the person who is building our common future on a day-to-day basis. We are referring to all the excavator operators who are often forgotten in the major projects, but who are actually at the centre of the action and are a must on the work sites of today,” says Per Väppling, Head of Sales and Marketing at Rototilt Group AB.

From all the contributions, the following winners have been selected:

Rickard Hessle from Gothenburg, Sweden
Rickard has over 25 years of experience with machinery, having started at the young age of seven. For the last few years, he has largely been operating excavators over 30 tonnes: mainly a custom-built Volvo with a long excavator arm. His focus is on major infrastructure jobs, including some that involve blasting preparation and cleaning after the job, as well as some on and around railways.

“Working with a Rototilt tiltrotator is absolutely world-class; you can get anywhere and it’s incredibly flexible even with such big machines,” says Rickard.

Pål Bergly Østre from Oslo, Norway
“It’s fantastic to be one of the winners! I’m a real machinery nerd, so it’ll be really cool to get to visit the Rototilt factory. Rototilt really has revolutionised the way we work with excavators,” says Pål Bergly Østre.

Pål has been operating excavators, mostly wheeled excavators, for nine years. He works for Oslo Municipal Water and Sewage on various different maintenance jobs. In his day-to-day work, a tiltrotator is a must for Pål.

Hannu Saukko from Oulu, Finland
Hannu Saukko is a sole trader from Merijärvi in Northern Ostrobothnia, but essentially works all over Finland. His jobs mainly consist of railway construction and maintenance, but he also works on bridges and roads. Hannu has been operating excavators since he was seven years old, and has been working with Rototilt’s products for over ten years. The oldest tiltrotator is an RT80, which has clocked over 16,000 hours.

“It’s very nice to win this prize. I’m looking forward to exchanging views and providing my own suggestions and ideas to the technical department,” says Hannu on winning #excavatorhero.

Brendan Mulholland from Antrim, Ireland
Brendan has been operating excavators for almost 30 years. Three years ago he invested in a Case 130 D with Rototilt’s tiltrotator.

“The most fun thing about the job is seeing the looks on people’s faces when I start working with the machine. Everyone is surprised by what I can do just because I have a tiltrotator. It doesn’t matter what job I’m doing; having a tiltrotator is always a huge advantage and makes the job much easier. I’ve also been getting more jobs. I would never go back to working without one; I’d do something else instead,” says Brendan.

The competition was conducted on social media (Instagram and Facebook), and the winners will get to visit the Rototilt factory. On 23 August, the four winners will get to spend a full day in Vindeln, Sweden and the surrounding area. The itinerary includes a company presentation, a factory visit and a “future workshop”, along with the chance to experience the natural surroundings with activities such as white water rafting in the Vindel River and an overnight stay in the treehouses at Granö Beckasin.

“It feels fantastic to get to visit Rototilt and have a look at their production,” says Rickard Hessle from Gothenburg, one of the winners of the #excavatorhero competition.

Rototilt is a world-leading supplier of tiltrotators, accessories and systems. With Rototilt® we break new ground for construction machines by converting excavators to full-fledged tool platforms. Through a global service network, we offer a unique combination of technical expertise, quality, capacity and understanding of the customer’s business. Our customers are found around the world and we strive to ensure that they experience precision, reliability and commitment in all contact with us. More information is available at rototilt.com.

Prior to publication, it must be approved by Rototilt Group AB. 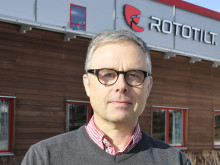