Researchers at Chalmers University of Technology are first to show the use of sound to communicate with an artificial atom. They can thereby demonstrate phenomena from quantum physics with sound taking on the role of light. The results are published by the journal Science.

The interaction between atoms and light is well known and has been studied extensively in the field of quantum optics. However, to achieve the same kind of interaction with sound waves has been a more challenging undertaking. The Chalmers researchers have now succeeded in making acoustic waves couple to an artificial atom. The study was done in collaboration between experimental and theoretical physicists.

"We have opened a new door into the quantum world by talking and listening to atoms", says Per Delsing, head of the experimental research group. "Our long term goal is to harness quantum physics so that we can benefit from its laws, for example in extremely fast computers. We do this by making electrical circuits which obey quantum laws, that we can control and study."

An artificial atom is an example of such a quantum electrical circuit. Just like a regular atom, it can be charged up with energy which it subsequently emits in the form of a particle. This is usually a particle of light, but the atom in the Chalmers experiment is instead designed to both emit and absorb energy in the form of sound.

"According to the theory, the sound from the atom is divided into quantum particles", says Martin Gustafsson, the article's first author. "Such a particle is the weakest sound that can be detected."

Since sound moves much slower than light, the acoustic atom opens entire new possibilities for taking control over quantum phenomena.

"Due to the slow speed of sound, we will have time to control the quantum particles while they travel" says Martin Gustafsson. "This is difficult to achieve with light, which moves 100,000 times more quickly."

The low speed of sound also implies that it has a short wavelength compared to light. An atom that interacts with light waves is always much smaller than the wavelength. However, compared to the wavelength of sound, the atom can be much larger, which means that its properties can be better controlled. For example, one can design the atom to couple only to certain acoustic frequencies or make the interaction with the sound extremely strong.

The frequency used in the experiment is 4.8 gigahertz, close to the microwave frequencies common in modern wireless networks. In musical terms, this corresponds approximately to a D28, about 20 octaves above the highest note on a grand piano.

At such high frequencies, the wavelength of the sound becomes short enough that it can be guided along the surface of a microchip. On the same chip, the researchers have placed an artificial atom, which is 0.01 millimeters long and made of a superconducting material.

The paper Propagating phonons coupled to an artificial atom is published online by the journal Science, at the Science Express web site.

Additional details about the research:

The sample that the researchers use is made on a substrate of gallium arsenide (GaAs) and contains two important parts. The first one is the superconducting circuit that constitutes the artificial atom. Circuits of this kind can also be used as qubits, the building blocks of a quantum computer. The other essential component is known as an interdigital transducer (IDT). The IDT converts electrical microwaves to sound and vice versa. The sound used in the experiment has the form of surface acoustic waves (SAWs) which appear as ripples on the surface of a solid. The experiments are performed at very low temperatures, near absolute zero (20 millikelvin), so that energy in the form of heat does not disturb the atom.

The theoretical research group, led by Göran Johansson, recently published a paper on how the acoustic atom functions:

Figure caption: On the right, an artificial atom generates sound waves consisting of ripples on the surface of a solid. The sound, known as a surface acoustic wave (SAW) is picked up on the left by a "microphone" composed of interlaced metal fingers. According to theory, the sound consists of a stream of quantum particles, the weakest whisper physically possible. The illustration is not to scale.

Chalmers University of Technology conducts research and offers education in technology, science, shipping and architecture with a sustainable future as its global vision. Chalmers is well-known for providing an effective environment for innovation and has eight priority areas of international significance – Built Environment, Energy, Information and Communication Technology, Life Science, Materials Science, Nanoscience and Nanotechnology, Production, and Transportation.
Graphene Flagship, an FET Flagship initiative by the European Commission, is coordinated by Chalmers. Situated in Gothenburg, Sweden, Chalmers has 11,000 full-time students and 3,000 employees.

Chalmers researchers extend the lifetime of atoms using a mirror

​Researchers at Chalmers University of Technology have succeeded in an experiment where they get an artificial atom to survive ten times longer than normal by positioning the atom in front of a mirror. The findings were recently published in the journal Nature Physics. 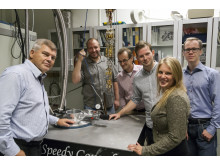 The researchers who captu...

The researchers at Chalmers University of Technology, by the cryostat used for the measurements. From left to right: Per Delsing, Thomas ... 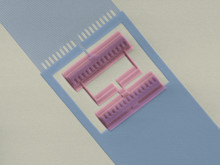 Zoom-in of the artificial atom, with its integrated Superconducting Quantum Interference Device (SQUID) in violet. The SQUID gives the at... 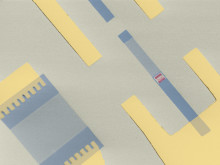 Microscope image of the a...

The artificial atom, in grey-blue to the upper right, can emit and absorb sound that moves across the surface of a microchip. The grey-bl... 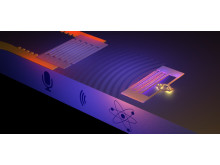 On the right, an artificial atom generates sound waves consisting of ripples on the surface of a solid. The sound, known as a surface aco...