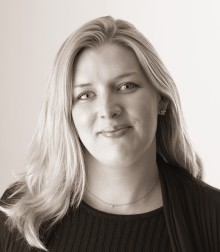 Before becoming a mum to Molly & Freddy and founder & CEO of Mama Jeanius, Katie spent over a decade as a successful corporate executive. At the age of 23 she became the youngest ever Director at Cable & Wireless, where she completed a number of acquisitions and new business development. In 2004 she joined Thomson Financial as Head of Strategy, Europe before becoming Head of Marketing, Europe and Asia in 2005. Katie played a key role in the merger of Thomson and Reuters in 2007/8 and as Global Head of Brand and Marketing Integration, she orchestrated the launch of the new brand which is now ranked 34th in the world by Business Week. Katie left Thomson Reuters at the end 2010 and launched Mama Jeanius in mid 2011. Katie was named one of the WIE50 (Women: Inspiration & Enterprise) in March 2012 and nominated for The Mumpreneur Awards 2013. Katie also has an interest in interior design and has a small consultancy: Amberley Interiors. Katie has a degree in Economics and a diploma in Interior Design. Katie runs her businesses around her two children Molly 3 and Freddy 6 months.