As one of their ‘100 days in office’ initiatives, the new European Commission intends to propose an initiative for an EU minimum wage. The aim is that by 2024 every worker in the EU should earn a fair and adequate wage, no matter where they live. And despite the Commission’s assurance that this would not alter national traditions of wage-setting, emotions are already running high – particularly among Scandinavian countries, which have collectively agreed sectoral minimum wages – not statutory. Unions from Central and Eastern EU Member States, on the other hand, tend to regard the initiative as a step towards gaining more substantial pay. Member States take different approaches to minimum wage-setting and there is no ‘blueprint’ as to which regime generates a more desirable outcome.

What minimum wages do and don’t do

Article 6 of the European Pillar of Social Rights has a worker-focused perspective at its core – using terms such as ‘fair’, ‘decent standard of living’, ‘the needs of the workers and their families’ and the prevention of ‘in-work poverty’ – while embedded in the context of national economic and social conditions and aiming to safeguard access to employment.

From earlier research, two main findings can be distilled: minimum wages probably do not harm employment a lot [1] (at least not substantially as a whole), but they tend to have a more limited impact on fighting in-work poverty [2] . The latter is dependent on household composition, complemented by the national system of benefits, taxation and social security contributions. The figure below illustrates just that: among the low-paid worker group – those earning less than 60% of the national median – the proportion of workers who find it difficult to make ends meet ranges from zero in Sweden to around 60% in Greece. 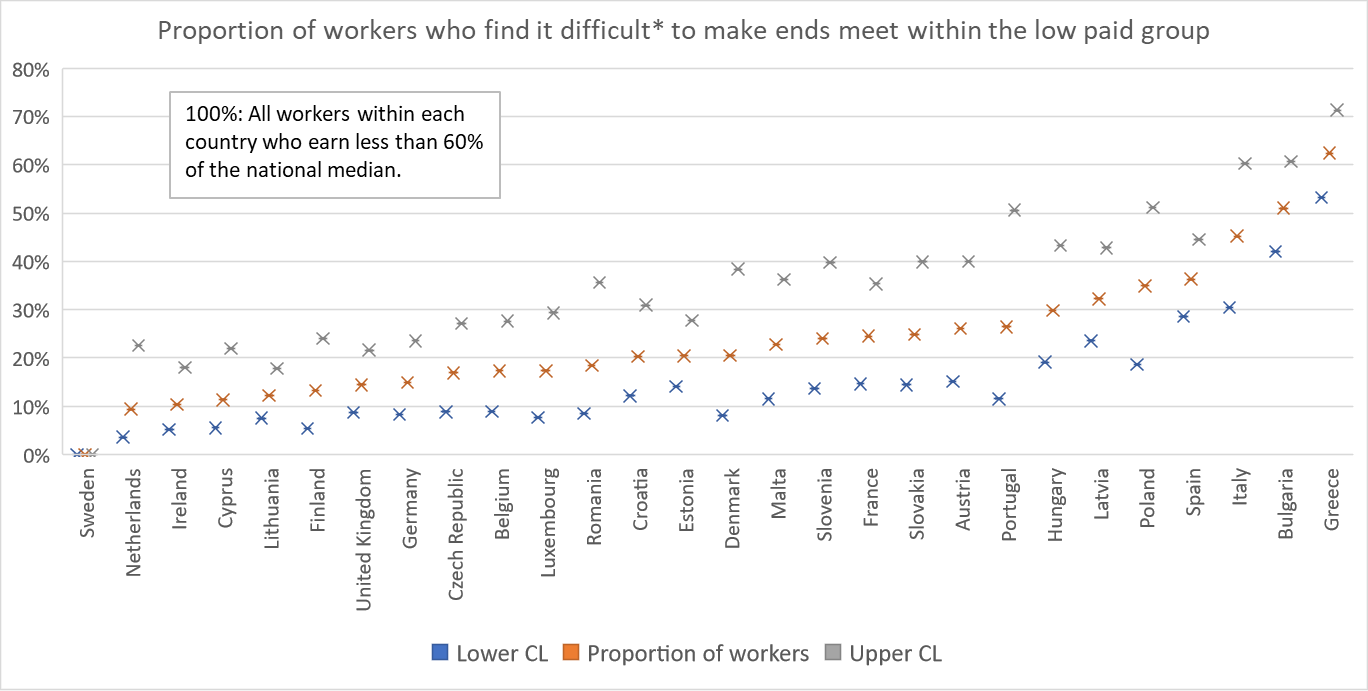 ‘Thinking of your households total monthly income, is your household able to make ends meet..?’ This relates to net income after benefits and transfers, and would also take the partner’s earnings into account’ *Difficult: Sum of those answering ‘with difficulty’ and ‘with great difficulty’.

Source: Eurofound based on 6th EWCS.

The most recent round of minimum wage increases have been – due not least to a still favourable economic development – relatively high across the board. Some EU Member States have increased their gross minimum wages quite substantially in the recent past or announced they would do so. In several cases, this was explicitly or implicitly linked to a percentage of wages: Spain had an increase of 22% for 2019 and the new government’s intention is to move towards 60% of average wages until 2024, while the Polish government announced – ahead of the 2019 elections – that they would increase wages from PLN 2,250 in 2019 to PLN 4,000 by 2024 (again, a rise projected to more than 60% of average wages [3]).

Elsewhere, the UK has just reached their target of 60% of the median wage and is now aiming for 66%, while Croatia legislated in 2019 to set minimum wages as ‘an upward share of average wages’. The Slovak parliament has taken a different approach with its minimum wage legislation, effective from 1 Jan 2020: if social partners cannot agree on the level of minimum wage for 2021 (up to a certain deadline), this will automatically be set as 60% of the average nominal wage of the previous year.

To what extent some of these envisaged increases might have originated in the shadow of the EU initiative is speculative, but cannot be ruled out either.

A different, ‘needs-based’ approach is currently under discussion in Slovenia and Romania. Under a new law, from January 2021, calculation of the minimum wage in Slovenia will be based on a formula where the minimum remuneration for full-time work will have to exceed the calculated minimum cost of living. In Romania, the ‘Law for a minimum consumer basket for a decent living’ has been under discussion in parliament throughout 2019.

These two approaches, while not explicitly labelled as such, can be regarded as being closely related to the ‘living wage’ concept and discourse. To date, living wages – aimed at guaranteeing workers and their families a decent level of living and social participation – are in place (on a voluntary basis and in addition to the statutory minimum wages) only in two EU countries: Ireland and the UK .

Fear and hope and a lot of speculation

While it is not clear what the Commission will propose exactly (although the figure of 60% of median wages figures high in the discussion), there has been some speculation over the past six months as to what it might entail: One level for all? A one-size-fits-all wage-setting? One common percentage of median wages – or something else?

In any case, the announced initiative has triggered emotions, fear and hope among social partners and in some Member States. The most vocal are representatives from Denmark and Sweden, where the social partners fear that their collective bargaining system will come under pressure and where not only any statutory solution to replace the autonomous collective bargaining, but also any other form of interference, will be rejected. On the other hand, the main unions from Central and Eastern EU Member have joined forces and written a letter to ETUC to express their support for an EU minimum wage, combined with an initiative to promote collective bargaining.

On 15 January 2020, the European Commission launched the first phase of social partner consultation according to Article 154 TFEU and has confirmed that ‘ EU Action would not seek the introduction of a statutory minimum wage in countries with high coverage of collective bargaining and where wage setting is exclusively organised through it’ .

Shift of focus to adequate and needs-based minimum wages?

In the years following the economic crisis of 2009 and beyond, the minimum wage policy was one of restraint – ‘allow minimum wages to develop in line with productivity’ – with a view to safeguarding employment and restoring macroeconomic imbalances through internal devaluation. Many Member States had frozen their minimum wages or only increased them very moderately. The new economic and political context has now shifted the narrative somewhat towards the perspective of the worker and their families. This is set against the context of declining unemployment, increasing labour shortages and migration from east and south to west – but is supported politically from left and right, especially in the months ahead of elections.

The EU minimum wage initiative now has the potential to give additional impetus to this shift of focus and ascertain that the levels of minimum wages in each Member States are reviewed in line with their adequate levels for workers. Having a ‘fair’ minimum wage in turn also implies that they should be fair for companies and continue to increase in line with productivity developments. It may also support an upward convergence of wages in the EU, if it helps to lift wages in the most low paid countries.

Prior to publication, it must be approved by Eurofound. 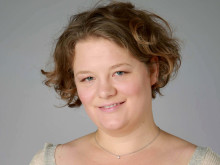 Christine Aumayr-Pintar is a research manager in the Working Life unit at Eurofound. She manages the quarterly reporting from the European... Show more

The latest Annual Review of minimum wages in Europe gives a detailed analysis of minimum wage rates across Europe, and not only looks at the nominal and real terms increased in minimum wages - but also levels of taxation and net pay.

Minimum wages have increased across Europe, but will low-wage workers feel the difference?

There have been wage increases for minimum and low-wage earners in most EU Member States, with rises in statutory minimum wages in almost all countries since January 2018. While these increases are welcomed as good news for minimum wage workers, Eurofound’s research shows workers may not automatically feel the positive impacts of these changes.