New calculations from Eurofound show that the difference in female and male employment rates cost the EU, including the United Kingdom, over €360 billion in 2018. This updated aggregate figure builds upon previous research done by Eurofound on the gender employment gap in 2013. Eurofound researchers have noted that reductions in the cost of the gender employment gap in the EU stagnated between 2015 and 2018, and there are indications that it may be starting to grow again; partially driven by recovery in employment in male-dominated industries.

Eurofound's new calculations on the cost of the gender employment gap come as the European Commission launches an ambitious new strategy to deal with gender inequality in Europe – including proposals on improving women's access to the labour market and strengthening gender equality at work.

Commenting on findings on the impact of sectoral employment recovery, Martina Bisello, Eurofound Research Officer, said “European labour markets are still characterised by a high level of sectoral segregation. The recovery in employment in male-dominated industries such as manufacturing, construction and transportation has to some extent contributed to the stagnation of the gender employment gap in recent years. These positive trends in male employment are to be welcomed and we should now seek to further improve the employment rates of women in Europe.”

Speaking about the overall implications of these findings for policy in Europe, Massimiliano Mascherini, Eurofound Head of Unit for Social Policies, said "The stagnation of the gender employment gap between 2015 and 2018, and its associated costs, ended a decade-long trend in comprehensive reductions in the employment gap between women and men – now is the right time for innovative new policies to improve women's access to the labour market.” 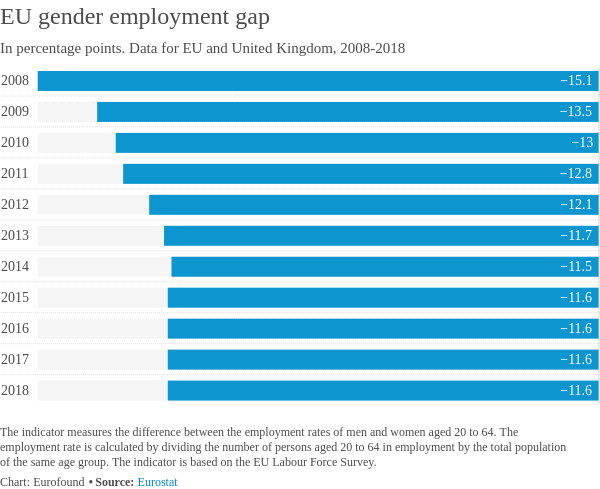 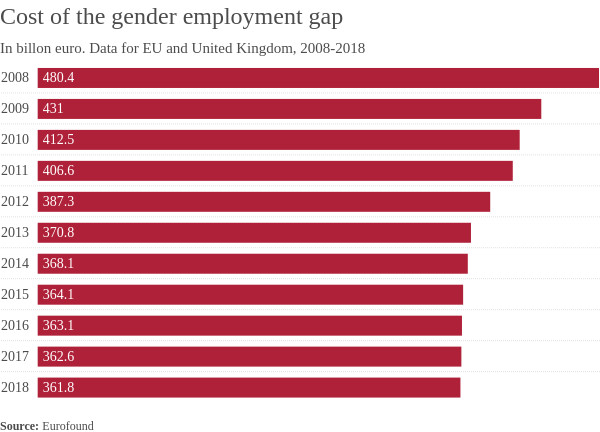 A new vision for a gender-equal Europe

​Today, the European Commission presented its strategy for equality between women and men in Europe. The Gender Equality Strategy 2020-2025 sets out key actions for the next 5 years and commits to ens

This weekend marks the Austrian national day. What’s the working life situation in the country?
25 October 2019

​Austria has one of the highest female part-time rates in the EU. This is linked largely to a heavy reliance on informal care where 80% of those in need of long-term care are being cared for informally by a family member. The high level of part-time work (47.9% of women compared to just 8.1% of men) has significant consequences for Austria’s gender pay gap.

We mark the Greek national day by sharing our research findings on living and working conditions in Greece.
24 March 2020

The onset of the COVID-19 pandemic has thrown societies around the world into flux and threatens to undo some of the positive progress that has taken place in recent years. However decreasing levels of societal tensions, such has been the case in Greece, may be a positive indicator of strengthening solidarity in society which is important in these difficult times.

Women in management: If we want to get serious about gender equality we need to talk about job quality

After more than 60 years of European policy on the equal treatment of women and men, men still outnumber women in management positions by almost two to one. The women who do make it into management are more likely to be in non-supervising management roles where they manage operational responsibilities but not staff, and the minority that do manage staff are more likely to be managing other women.