A lorry carrying around 26,000 litres of fuel, suspected of having been smuggled into Scotland from Poland, has been seized by HM Revenue and Customs (HMRC).

HMRC officers searched the lorry and discovered the fuel in 26 plastic tanks after it was stopped by officers from Police Scotland at an industrial estate in Dumbarton. The estimated revenue loss on the fuel, seized on Saturday (24 August), is £20,000.

“Those who smuggle flammable fuel in vehicles not designed for its safe transport show a complete disregard for the safety of other ferry passengers and motorists. Illicit fuel is being sold at reduced prices and motorists may think they are getting a good deal because it is cheaper. I would caution them to think again as the true cost is far from a bargain and encourages activity that puts other road users at risk.

“We are working in partnership with the Scottish Organised Crime Task Force (SOCTF) and this success shows the important role that cooperation has in defeating crime and protecting our community.”

A 51-year-old man was interviewed in connection with the seizure and subsequently released. Investigations are continuing.

4. Pictures of the seizure are available on HMRC’s Flickr channel www.flickr.com/hmrcgovuk 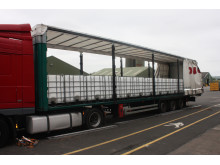