Detectives are appealing for information after five deactivated guns used in James Bond movies were stolen from a residential address in Enfield.

Officers were called to a property in Aldersbrook Avenue, Enfield, EN1, at approximately 20:00hrs on Monday, 23 March, to a report of a burglary in progress.

The suspects had left the scene before officers arrived after being disturbed by neighbours. They drove away in a silver vehicle.

The suspects, described as three white males with Eastern European accents, forced entry into the rear of the premises and stole five deactivated firearms used in James Bond films, believed to be worth more than £100,000.

The stolen weapons are described as:

Detective Inspector Paul Ridley, of North Area CID, investigating the burglary, said: “The firearms stolen are very distinctive and bespoke to particular James Bond movies. They will almost certainly be recognised by the public and to anyone offered them for sale.

“I have provided photographs of the stolen firearms and provided the unique serial numbers. Many of these items are irreplaceable. For example, the Magnum is the only one in the world ever made in which the whole gun is finished in chrome. It has a six and a half inch barrel and wood grips. The Walther PPK was the last gun used by Roger Moore in ‘A View to a Kill’.

“The owner is very upset that his address has been violated and he truly hopes to be re-united with these highly collectable items.

“I would urge any members of the public that may have witnessed the burglars arriving and leaving, or who know where the firearms are, or may have been offered these stolen items for sale, to come forward to my investigation team as a priority.”

Anyone with information that could assist the investigation is urged to contact North Area CID via 101, or by tweeting @MetCC quoting CAD 5890/23MAR20.

Information can also be reported anonymously to Crimestoppers on 0800 555 111 or online at www.crimestoppers-uk.org.

No arrests have been made.

Security has been stepped up at the premises.

Burglary advice is available on the Met's website at www.met.police.uk/cp/crime-prevention/residential-burglary 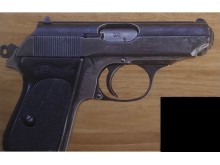 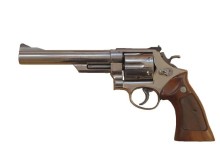 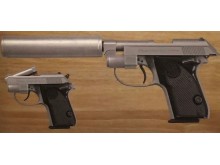 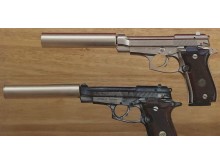