Detectives investigating an assault on a man who was attacked with a glass bottle in Ealing have released images of two men they wish to identify.

At 00:32hrs on Sunday, 18 August 2019 officers and the London Ambulance Service were called to The Mall, W5 to reports of a male assaulted with a glass bottle.

A 25-year-old man was found with a fractured skull. He was taken to a London hospital and has since been discharged however, he is still undergoing treatment due to the injuries caused.

One man has been arrested and charged as part of the investigation, but detectives from the West Area CID are asking for the public’s help to identify two further men they wish to speak to in connection with the assault.

Detective Constable Tim Warren, from West Area CID, said: “This was an brutal attack which has left a young man requiring ongoing treatment.

“These images are of good quality and we urge anyone who recognises the men pictured to get in touch and assist us with our investigation.”

Anyone who may know the identity of the two men, or who has information that may assist police, is asked to contact call police on 101 quoting reference 252/18AUG19. You can also tweet @MetCC.

Alternatively, you can call the independent charity Crimestoppers anonymously on 0800 555 111. 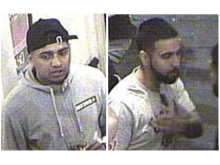