Detectives are appealing for assistance in identifying a group of men who committed a violent robbery at a jeweller’s shop in Haringey.

One of the group - Andrew Elliott, 32, of Downs Road, Luton – was jailed on 10 January at the Old Bailey.

Officers from the North Area Command Unit launched an investigation after Elliott and two other men robbed a jewellers in Green Lanes, N8.

On 15 April 2019 at 12:45hrs, a man walked into the shop and asked for a piece of jewellery to be valued before attacking a female member of staff.

At that point, another male suspect forced entry to the store, closely followed by Elliott, and began ransacking the shop, stealing trays of jewellery from the various display cabinets. The female employee was fortunately able to escape and seek refuge in the rear of the store.

The men were seemingly unable to determine that the trigger switch for the door had to be activated for them to leave. In desperation, they used brute force to attempt to break open the front door however were unable to do so. One of the men and Elliott were eventually able to let themselves out, while the other robber was only able to leave when a passer-by opened the door from outside. The robbers made off with a substantial amount of jewellery.

The victim was terrified by the attack and although her injuries were not serious, she was left deeply shocked and disturbed.

Officers have today launched a new appeal on the BBC’s Crimewatch Roadshow to attempt to identify the two outstanding robbers. The victim, Maggie Hatem, owner of the jewellers described to the programme the ordeal that her loyal shop worker of twenty years endured. The incident has deeply affected her, she feels afraid of people and always fears she is going to be attacked. The owner herself continues to be emotionally impacted by the distressing robbery.

Detective Inspector Paul Ridley, from North Area CID, said: “While I am pleased to see one of the robbers paying the price for his part in this robbery, I remain focused on identifying and apprehending the two remaining suspects.

“Someone knows who they are and I urge anyone who can name these dangerous individuals to contact us without delay.

“The footage of these criminals has been widely circulated on Social Media however the suspects are still at large and I have therefore made the decision to approach Crimewatch for assistance to identify these men.

“The independent charity Crimestoppers has also offered a £5,000 reward for anyone who provides information that leads to the conviction of the suspects.

“To assist the public I am issuing enhanced aspects of the CCTV footage for greater clarity.

“This was a violent and cowardly attack on a lone woman, tell us what you know and help us remove these dangerous individuals from your area.”

Anyone with information that could assist the investigation is urged to contact North Area CID via 101 quoting 3266/15APR or Tweet @MetCC.

Information can also be reported 100% anonymously to the independent charity Crimestoppers on 0800 555 111 or online at www.crimestoppers-uk.org. Please note: the reward only applies to information passed directly to Crimestoppers and not the police.

More images and moving footage can be found at http://news.met.police.uk/news/man-jailed-for-violent-aggravated-robbery-of-jewellers-shop-391309 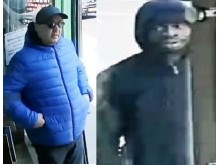 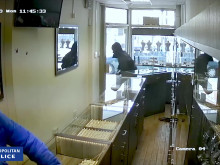 Footage of the robbery