A man has been sentenced to 18 months in jail for his role in the burglary of a central London restaurant.

Hassan Gawish, 20 (09.09.99), of no fixed address, pleaded guilty to one count of burglary and one count of common assault at a hearing at Southwark Crown Court on Wednesday, 25 March.

The court heard that at around 05:55hrs on Thursday, 28 November 2019, Gawish and a group of four other men entered a Lebanese restaurant on Edgware Road.

Once inside, they threatened two members of staff until they revealed where the money was being kept.

They then used a crowbar to break open an office door and removed two safes, dragging them out onto the street.

As they loaded the larger safe into a silver Honda Civic they were disturbed by a marked police car responding to a call made by one of the staff.

Three of the men immediately fled on foot while the car was quickly driven away with the large safe – containing between £300,000 and £350,000 in cash – in the back.

Gawish, who had remained inside the building, was detained by a member of staff as he ran out onto the road. As he attempted to make his escape, he punched the victim in the face and attacked him with a metal kebab skewer.

Despite the assault, the victim managed to keep Gawish at the scene and officers arrested him.

Detective Sergeant Pete Lower, from the Central West CID’s burglary unit, said: “This was clearly a pre-planned burglary in which Gawish played a pivotal role. He had no hesitation in attacking anyone who stood in his way and it is only by luck that the victim was not more seriously injured.

“A large amount of money was stolen from the restaurant and has still not been recovered, and four suspects remain outstanding.

“We are doing all we can to identify the others involved and would encourage anyone with information to contact us on 101 with reference number CAD 1112/28NOV19.” 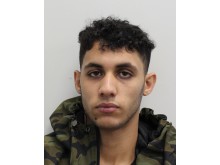