A man who carried out two shop robbery offences at gun-point has been jailed.

O’Shea had previously pleaded guilty to one count of robbery and another of attempted robbery.

Detective Constable David Reed, of the Met’s Flying Squad, led the investigation. He said: “I have no doubt the suspect would have continued committing this terrifying spate of robberies and the sentence today is a deterrent to those thinking of carrying out such violent crimes.”

On 13 July 2019, O’Shea entered a Co-op convenience store on Westhorne Avenue, Eltham, at around 21:05hrs. He threatened the store clerk with a gun and demanded money from the register. He managed to take around £300 from the shop before making off.

After the robbery, a family member of one of the shop workers viewed the CCTV and recognised O’Shea.

Just five days later, on 18 July 2019, O’Shea attempted to rob another small sweetshop in Charlton at gun point. This time, the shop assistant managed to trigger the panic button, causing him to flee the scene.

The police quickly arrived and viewed CCTV footage, identifying O’Shea as the person who was also responsible for the robbery on 13 July 2019.

A manhunt was launched and Flying Squad officers were able to track down O’Shea at an apartment near to where he had attempted the second robbery. He was arrested and the premises searched by officers. During the search a firearm and the clothing worn by the robber in both offences was seized.

After the firearm was recovered, forensics determined that it was actually an imitation gas-powered handgun.

O’Shea admitted to police that he had used the firearm to steal the money and admitted committing both robberies to fund his drug addiction.

O’Shea was charged on Friday, 19 August and remanded in custody. 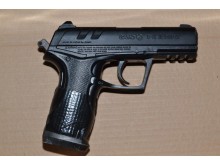 The pistol used by O'Shea