A man who was riding a stolen motorbike whilst disqualified from driving pleaded guilty to six offences on Thursday, 6 February.

He has been remanded into custody and will be sentenced at a later date.

Ward’s guilty plea comes at the same time as the Met releases an animated video titled ‘The Life of a Stolen Scooter’ – in which officers are authorised to use tactical contact to arrest moped enabled thieves.

The video is part of the Met’s ‘Lock, chain, cover’ campaign which encourages scooter riders to layer up their security to protect their bikes and prevent theft.

At 16:11hrs on Tuesday, 4 February, officers from the Met’s Operation Venice Command were deployed on a proactive operation along with local officers.

The unit’s attention was drawn to a motorcycle that immediately failed to stop for marked police motorcycles. The motorbike was also confirmed as stolen from Hertfordshire in December, 2019 and displaying a false registration plate.

Marked Operation Venice motorcycles commenced a pursuit with the motorbike that failed to stop all the way to Wood Green High Road and repeatedly mounted and drove along the pavement.

At Wood Green High Road, a marked Venice TPAC vehicle was authorised to use tactical contact to stop the pursuit.

This was successful and the single rider ran into Wood Green Shopping Centre where a foot chase commenced.

Officers pursued and detained Ward in the second floor car park, where he was then arrested.

He was arrested on suspicion of theft of a motorcycle, dangerous driving/riding, failing to stop and possession with intent to supply class B drugs. He was further arrested for driving whilst disqualified.

He was taken to hospital as a precaution before being remanded into custody.

He was charged on Wednesday, 5 February and appeared at Highbury Corner Magistrates’ on Thursday, 6 February.

Sergeant Tony McGovern, from the Met’s Operation Venice Command, said: “Ward failed to stop for Operation Venice police motorcyclists when they signalled for him to pull over, a pursuit was then authorised.

"Riding their new BMW F750 GS-P bikes, the ‘Scorpion’ riders were able to stay in contact with Ward whilst coordinating with the Scorpion TPAC cars in order to bring this incident to a safe conclusion. The manner of Wards riding was dangerous and wreckless and he showed little regard for members of the public, especially when he rode the stolen motorbike on pavements, cut across roundabouts and rode on the wrong side of the road.  It’s pure luck that no one was injured."

The new BMW F750GS-P bikes have been tailored to meet the specific requirements of the specially trained officers who will use them. They are uniquely suited to navigate throughout London, even in some of the narrowest and most difficult roads to travel through – their smaller size and lightweight advantage provide agility, giving a clear tactical advantage to officers pursuing moped thieves across London’s busy streets. The bespoke specifications of the design have focused on keeping the motorcycle narrow so that it can operate anywhere and access areas where larger motorcycles simply cannot go.

Detective Chief Inspector Shaun White, the Met’s lead for Operation Venice said: “Tactical contact is one of a range of tactics that Operation Venice officers have available to them. Officers undergo specialist training and are equipped to minimise risk and will always seek to bring pursuits to a safe conclusion.

“The tactical option of pursuit has many layers of continuous risk assessment. This includes the driver and riders themselves and the Met Control Command radio operator.

“The final decision to use tactical contact rests with the driver and will be initiated when considered proportionate and necessary and other tactics are neither practicable, nor achievable, within what are fast moving and dynamic incidents.”

+ The launch of the animated ‘Lock, chain, cover’ video is based on a number of real life situations and crime reports that officers have successfully investigated.

It is being launched as part of the ongoing campaign to remind bike owners of the importance of using all three methods to protecting their vehicles and deterring moped enabled crimes in London.

It shows how a stolen scooter can be used to commit multiple crimes around London affecting several victims. The video ends with the use of tactical contact and officers asking members of the public to lock, chain and cover their bikes to make their vehicles more secure.

The release is in advance of the Carole Nash MCN Motorbike Show taking place at the ExCel from Friday, 14 until Sunday, 16 February where the Met will have a stand. 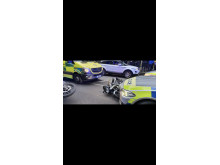 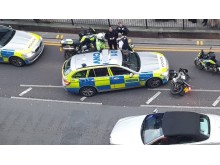 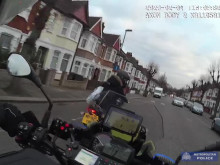 Konna Ward was stopped by officers from the Met's Operation Venice team. 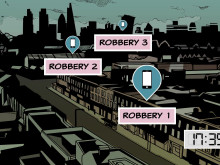 Life of a stolen scooter