A man who stole a pair of trainers from a schoolboy and then stabbed another teenager to death after he tried to get them back, has been jailed for life with a minimum of 21 years.

Lindo had pleaded guilty to robbery but denied murdering Perry, who was stabbed 10 times across his body.

A jury heard that at approximately 11:02hrs on 30 August 2019 at Bruce Grove station, N17, Lindo spotted a 14-year-old boy carrying a bag with a new pair of Nike trainers.

Lindo approached the teenager and made out he had a knife before grabbing the bag but, when the boy clung on to the straps, punched him in the face. The straps snapped and Lindo walked away, carrying the stolen shoes.

The 14-year-old called his friend, who was with Perry, and told them his attacker was heading towards the Broadwater Farm Estate. The friend cycled towards the neighbourhood with Perry on the handlebars.

On the way there, the friend got off, and Perry carried on cycling when he saw Lindo and the pair got into an altercation.

Lindo grabbed Perry around the neck and repeatedly stabbed him, ignoring a witness who screamed at him to stop.

Perry dropped to the ground and Lindo cycled off on the bike Perry had used to get there. He dumped the bike and his blood stained clothes as he fled.

Police and London Ambulance Service rushed to the scene and desperately tried to save the schoolboy but, despite their best efforts Perry died five days later (4 September 2019) from his injuries in hospital.

Officers launched an investigation and, on the day of Perry’s death, CCTV stills of the suspect were circulated amongst Metropolitan Police officers. One officer recognised Lindo and work began to trace him.

At 04:00hrs on 6 September 2019, officers traced Lindo to his friend’s address in Broadwater Farm, N17, and forced their way in. They found Lindo on the sofa and arrested him on suspicion of murder.

A unanimous jury found him guilty of murder. He was found not guilty of possession of an offensive weapon.

His Honour Judge Heathcote Williams thanked the police for their fair minded and meticulous investigation.

Perry’s family said: “Perry will always be the light of our lives. We often wonder what our children will be like as adults, we will never know for Perry. Perry was unique sincere loyal, genuine, loving, honest and a very caring son. He had a smile that would light up a room and had a gift for making people feel loved and important.

“We take some comfort that our child was doing the right thing at the time and was being a hero. He was helping another child who he did not know who was violently robbed of his trainers. For some there may have been a choice not to help, however our Perry would, as he has always stuck up for what was right.

“Our Perry did not deserve what happened to him, no one does.”

Detective Chief Inspector Neil John, from the Met’s Specialist Crime North, said: “This was a vicious and sustained attack on a young man who lost his life whilst simply trying to help another teenager. Romario Lindo is a dangerous individual who has robbed both Perry of his life and Perry’s family of their precious son.

“I am grateful to the officers who were untiring in their efforts to track down Lindo and bring him to justice.
“We will continue to work relentlessly to identify and pursue offenders, take weapons off the street, support victims, engage and reassure the public, and keep our communities safe.

“We ask the public to remain vigilant and if you see any suspicious activity, have any concerns, or have any information about suspected criminality, please call police on 101. In an emergency always, dial 999.”

+ Do you know someone who is carrying a knife? If you have information that could help keep your community safe, but don’t want to speak to police, please contact the independent charity Crimestoppers 100% anonymously on 0800 555 111. They do not ask your name and cannot trace your call or I.P address.
Any young people who have information about violence or knife crime, can visit www.fearless.org to pass on information anonymously; help and support is also available at https://www.knifefree.co.uk. 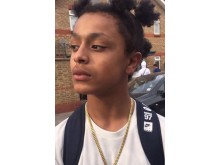 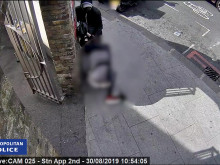 CCTV of robbery in Tottenham