Detectives investigating the fatal stabbing of a man in Hendon have named the victim as 24-year-old Asante Campbell from Edgeware.

Police were called just after 21:00hrs on Saturday, 29 February, to a report that a silver VW Polo car had collided with a parked car in Parson Street, NW4.

He was taken to a north London hospital where he died later that evening. Next of kin were informed. We await post mortem and formal identification.

There have been no arrests. Urgent enquiries are underway, led by homicide detectives from Specialist Crime, to establish the full circumstances.

Detective Chief Inspector Andy Partridge, who is leading the investigation, said: “We believe Asante was parked up in the silver VW Polo in the car park in Stratford Road, off Bell Lane, NW4, minutes before the collision took place in Parson Street. We believe he was attacked in the car park.

"It is likely that a number of witnesses in the Belle Vue Estate may have witnessed the attack. I am appealing for anyone who saw the incident, or who knows anything about what happened, to make contact with my officers. All calls will be treated in the strictest confidence.

Asante was arriving at the car park, in order to travel to work for a night shift. He had just left his girlfriend and newborn baby at home in Edgware 15 minutes earlier."

Witnesses or anyone with information are asked to call police on 101 quoting ref 7686/Feb29.

If you do not want to speak to police, please contact the independent charity Crimestoppers 100% anonymously on 0800 555 111 or by visiting their website at www.crimestoppers-uk.org.

They never ask your name and cannot trace your call or IP address. 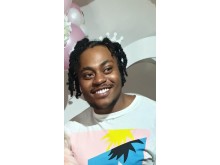