Prisoner who admitted possessing an offensive weapon has been further jailed

Bangs was identified under a joint operation between the Met and the prison service aimed at reducing violence in prison.

He had improvised the weapon by inserting a nail in the casing of a pen. It was found in his possession in December 2019 and he was immediately arrested and later charged.

At the time, he was at the very end of an eighth month prison sentence for possession of an offensive weapon.

Detective Constable Alex Furniss, from the Met’s Prison Intelligence Unit, said: “Bangs had just one day left in prison when he was found with a dangerous weapon in his cell.

“He must now face the consequences of his actions and spend further time behind bars.

“We are committed to targeting those who carry weapons and are working closely with the prison service to remove these dangerous items from jails.”

Trish Mitchell, Serco Prison Director at HMP Thameside, said: “We are working closely with the Metropolitan Police to prevent criminal activity in the prison and we are pleased at the result of this case.

“We have a zero tolerance approach to weapons of any kind in the prison and we will always take appropriate action when we find any.” 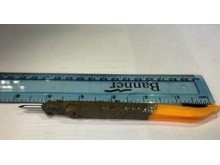 Improvised weapon made by...