Same-sex sexual behavior (SSB) is behavior usually displayed during heterosexual mating and courtship rituals, but instead displayed towards individuals of the own sex. SSB is common in animals ranging from insects to mammals, presenting somewhat of an evolutionary enigma. A new study from researchers at the Department of Ecology and Genetics at Uppsala University now sheds light on the pervasiveness of SSB in the animal kingdom. The researchers hypothesized that, because males and females share most of their genes, SSB may occur in one sex because its underlying genes carry benefits when expressed in the other.

The idea was tested in a small seed beetle where both males and females express low levels of SSB. The researchers used artificial breeding on either males or females to create genetic strains with increased tendency to display SSB. Using these strains, the researchers showed that when a particular sex had been bred for increased SSB, siblings of the opposite sex enjoyed an increase in reproductive performance.

‘For example, we noted that males that had been bred for increased same-sex mounting behavior were less discriminating when given a choice between courting a male or a female in later tests, while their sisters laid more eggs and produced more offspring than before’, says David Berger, Assistant Professor at the Department of Ecology and Genetics at Uppsala University and one of the researchers behind the study.

The findings thus support the idea that SSB may be prevalent in one sex because the genes regulating the behaviour are preserved by natural selection through their benefits in the opposite sex, pointing to a general mechanism maintaining multiple forms of SSB across a wide variety of animals. 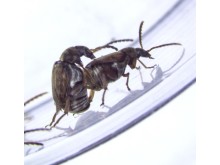 Two male seed beetles. The male to the left is trying to insert his genitalia into the other male after having mounted him. This usually ... 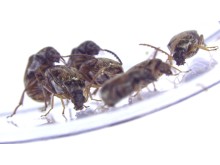 A group of male seed beetles. Two of the males are mounting and trying to mate with two other males, which happens frequently when males ... 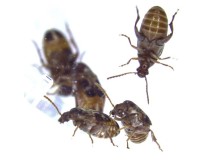 A group of five female seed beetles, of which one in the bottom pair is trying to mount the other by climbing up on her back.