Intern Veronica Chu gets to hear first-hand from the man behind WHOY what it's all about!

WHOY -World House of You - is a new, London-based online fashion company where creative minds can use the company’s online ‘WHOY machine’ to design their own leggings, with the aim of getting them produced and sold in the WHOY shop. Users simply share their designs through platforms such as Facebook, Instagram and Twitter; and if their artistic creations gain enough votes, the leggings are produced and promoted by WHOY, with a share of the profit going to the designer. The website is full of snappy catchphrases and funky graphics; perfect for the young, hip generation who will be designing and buying these leggings. So, who is the mastermind behind WHOY you may ask? Well, the company was founded by none other than the brilliant minds of Daniel Poole, Robert Soning and Paul Birch.

Paul Birch is one of the UK’s most successful Internet entrepreneurs and a pioneer of social networking. Paul co-founded Birthday Alarm (50m users) and Bebo, which was sold to AOL in 2008 for $780mil.

Robert Soning is the founder of Londonewcastle, a hip property development company that has built over £500m of projects and owns one of London’s largest and most iconic contemporary street art galleries.

And last but not least is Daniel Poole. Poole launched his clothing brand, dp, in 1984. The brand was a huge success, with Daniel collaborating with high street stores to produce collections such as Daniel Poole for Topshop, Daniel Poole for River Island and Daniel Poole for H&M. By 1987, he had won a Queens Award for Export.  In the 90's he turned to sportswear and along with Duffer of St George, Box Fresh and Komodo and Slam City Skates; they founded the now huge street fashion industry. With his clothes endorsed by pop-stars such as Robbie Williams, The Stranglers, Take That, East 17 and Mary J Blige; Daniel enjoyed massive global success. The line was stocked in 600 independent stores worldwide.

So with the founders’ combined expertise in fashion, art, technology and marketing; the launch of WHOY is highly anticipated and sure to take on the fashion industry by storm. Today, I had the lucky chance to talk to the creative director of WHOY, Mr. Poole himself; about how the company began, the company’s values and the future of W#OY…

V: So, Daniel, how did you get into fashion?

Well, it all began at a young age. My mother was a couture dress-maker, so she made my school uniform in the 1970s…

V: So you wore dresses to school then??

*Laughs* not quite, but close…. I wore flared trousers and 7-inch platforms *strange look from V* c’mon it was 1973! My school had a very strict dress code, which I corrupted on a regular basis and got sent home for. Then at 15, I worked in the Oxford Circus branch of Topshop for a jeans concession. I was lucky enough to be made a management trainee and spent 3 years on the road, going all over England and Wales. I set up a fashion company with an Egyptian guy and did that until I was 21. Then I went to law school, and when I graduated I took a year out to work for Ray Kelvin before he created Ted Baker. I started designing menswear for him, and then I was poached by a big fashion company, launched my label Daniel Poole in 1984.

V: What happened to the Daniel Poole label then?

I licensed my label to a German company and pursued my passion in interior design, the license did not work out but by then I decided to stick with interiors .

V: So what made you re-enter the fashion industry?

Well, I had an art gallery in Primrose Hill, and that’s where Paul, Rob and I live. Rob has one of the best, most successful contemporary art galleries in Shoreditch and knew of my clothes from the 90s. So they were trying to convince me to relaunch my label again; I said ‘No, no, no. I’m not going into that again!’ but then together we came up with the idea of WHOY, through which I will launch my label.

V: Don’t you think you’re getting a bit old for street wear now?

Yes !!*laughs* I think it doesn’t matter how old you are, as long as you’re young at heart.

V: So… what’s the inspiration for WHOY?

Oh, this links back into the question you just asked actually! When I was 16, I felt like I was way better at designing for 16-17 year olds than I am now as a 54 year old man.  Then, I knew what was ‘happening’  but didn’t have the training, capital or connections to start my own clothing company.

It seems with fashion nowadays, you’re either a businessman with the necessary capital; you’re working anonymously through a big company like Topshop; or you’re one of the rare super-talented who’ve actually made it, like John Paul Gaultier. Between those 3 polarities, there are 1000s of brilliantly creative, talented people who don’t have an outlet for their work.

And that’s where WHOY comes in. Because of the digital age, we are now able to skip all those years of craft, experience and training and bring fashion right back to where I think it should be: to its traditional roots, from the street! We’re providing the wood and kindling, we just need the bright spark to light the fire.

V: And how will that happen?

Well, we provide you with a plain, high quality canvas to work on and some amazing software that helps you realise your ideas.

Well the first product to be released on the WHOY platform is digitally printed leggings. These are made from 4-way stretch fabric, which can be washed again and again without losing their shape; printed in the best print factory in England, using fabrics and inks sourced from England. They are of superior quality, using the same fabric as gymnastic clothes, making them truly versatile items! Later on we will be releasing more products but we are in R&D at the moment.

V: What other products will be coming out?

Can’t really tell you now, we have a number of great products in r n d that are  apparel and footwear related .

V: So people can put whatever they want onto this digital canvas?

Yes,  they can simply upload their design or picture onto the WHOY-machine...and if it gets enough likes, it’s produced! People can get snapping on their phones, cameras...put Instagram pictures onto your leggings if you like! That’s the joy of WHOY, people can really personalise their items.But it is  more about creating great artwork and designs .

V: So there’s no censorship at all?

We want to promote the open minds of the future, so there won’t be strict censorship. At the same time, we do not tolerate discrimination on race, gender or creed; so any blatant ‘hate-art’ will be removed.

V: Does WHOY have any other company values?

Yes, as well as the ones I’ve already mentioned, as our production moves to worldwide locations, we will still only ever work with factories which comply strictly with the local labour and environmental requirements. Also, our clothing will always remain of superior quality whilst being affordable and produced with care as to our workers and the environment.

V: So, do you see WHOY becoming a global company then? Where do you see the company in a few years time?

Oh yes, definitely. Fashion is one of the first truly global industries. We’ve started off in London, which is the heart of a global youth culture, and we will definitely want to grow quite rapidly, just like dp, and become a global company. We’ve already had meetings with famous brands and celebrities, and we’ll be running competitions to create leggings for these celebrities which will help. One day you upload your design, a few weeks later you see it on Rihanna, or in some Korean supermodel band. Fashion goes quick.

V: So, with the growth of WHOY, do you also see the designers using your website making themselves a name through the WHOY platform?

Yes, of course. When a pair of leggings goes into the voting section, ALL ARE ONE; no hierarchy. No one has an advantage over anyone else; it’s all based on the design. A first-timer is just as likely to get their leggings sold as a professional. Not only can they make money, they can build their profile through our social media and theirs, and as they design more things, we can build them a fan base, or they can make their own. We’re about building a community – you can design it, buy it, vote for it or promote it. Get involved at any stage. Democratization of the whole process; enabled through the digital-age. This is happening throughout the creative industries.

In the 80s I shared a flat with a mate who was about the same age as me and was the top video camera handheld man in the country. The camera weighed about 20kg, and he was paid £1000 a day. He used to shoot Madonna, Prince, WHAM…a whole load of big names.

Nowadays you can shoot just as good as him on a HD camera that costs 200 quid. The point is, it no longer takes years to build the craft skills or get the money for equipment, that’s how the digital age has progressed.

Take the music industry and the rise of YouTube stars for example…y’know people like Jessie J.  The fashion industry is different: a lot of the time, even if you have the talent, you have to get the capital, business admin and other resources to get your designs out there. And that’s why there are such crap designs in the shops, it’s not all about the design, it’s about your ability to manufacture and sell it. The WHOY platform is changing this though - WHOY for designers is a bit like releasing a hit record from your bedroom; it really can happen! And that’s the joy of WHOY!!

V: So, you think WHOY is a force for good?

Of course, that’s one of the reasons we’re doing it!

V: The superman of the fashion industry, eh…

Hmmm I wouldn’t go that far ...but I do like his meggings! Not sure about his pants though…

V: *laughs* Well, I think that’s all we have time for. It was a pleasure talking to you.

Prior to publication, it must be approved by WHOY . 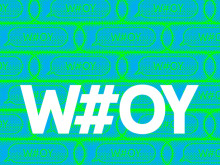