Research shows that 15000 individuals are active within what is defined as organized crime and within violent extremist groups in Sweden.

“This shouldn’t surprise anyone, as there are so many results that should alarm us and cause concern,” says Amir Rostami, reader in criminology at University of Gävle.

Amir Rostami points out that it is important that we grasp the magnitude of the problem, because, in the end, it poses a threat to democracy. When individuals choose to organize to break the law for financial or ideological purposes and use violence as a means to reach their goals, they in fact compete with the government’s role. 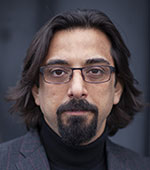 “Now, we know, and don’t need to only speculate about, the exact number of individuals in the registers as well as criminal, social and demographic characteristics,” Amir Rostami says.

The noted study, published in 2018, shows that circa 15 000 individuals are involved: around 12 000 within organized crime, around 1700 extremists (right, left or Islamists) and circa 700 active individuals within football firms.

“They are not alone”

According to Amir Rostami, many of our preconceived notions and prejudices are in fact just examples of prejudice. Individual threat actors are at times not acting alone, as they appear to be.

“Individuals within these environments are just as social or willing to engage in collaborations as individuals in the rest of society.”

For this reason, individual threat actors should be seen as part of the same problem and challenge.

“In our network analyses, we can see that individuals from different environments collaborate, and we see that so-called lone offenders also have certain connections to gangs. Certain individuals also appear to be very focused on collaboration, a type of criminal chameleons. “

“Such individuals are either opposed to the current system or view representatives of society as opponents or even as traitors.”

Amir Rostami attempts to weave this together with organized antagonism as there are not only similarities between organized crime and violent extremism, they also overlap.

Why are only 20 percent of gang homicides solved?

“We need to ask ourselves why only 20 percent of the gang m homicides are solved, in spite of technological advances and completely new legislation in recent years,” Amir Rostami says. “I think that we need to make demands on the efficiency of public authorities; it isn’t necessarily about gaining new tools, but about how we use the tools that are available to us.”

According to Amir Rostami, the gravest problem is that the work lacks structure; there is no clear strategy. Instead, there are stopgap solutions, and they are reactions to an agenda set by the media.

“Often, measures are temporary in nature. Long-term efforts need to be more accurate, and our means need to go to individuals at risk at a very early stage.”

“For stricter penalties to mean anything, criminals need to get caught”

“For stricter penalties to mean anything at all, criminals need to get caught,” Rostami argues.

“Eight out of ten perpetrators in gang homicides don’t get caught, and there are also a number of instigators who are never caught. Moreover, the clearance rate for use of explosives is very low. If this is the case, stricter penalties don’t matter. If you don’t get caught, it doesn’t matter.

“Crime development and issues of safety are moving in the right directions in many aspects, but concerning these individuals, there is a great difference. They frighten whole neighbourhoods, and they affect an entire society: their violence is on a different scale now,” Amir Rostami says.