For the first time, at AGRITECHNICA 2019, SAMSON AGRO A/S will show a brand-new slurry tanker series – the SAMSON TG.

SAMSON TG is a brand-new series of slurry tankers from SAMSON built on known and proven technology from both the SAMSON PG and PG II series and so including well-known and patented features of SAMSON-products, like the SAMSON Ejector.

The TG slurry tanker differs from the current PG II series in that it is designed to meet special needs coming from SAMSON export markets, i.e. like France, Germany and other European markets. All tankers of the series are e.g. prepared for the SAMSON Ejector.

In contrast to the PG II, the tanker can only be equipped with a max. 3.8 t lift, which, though, can be combined with most of SAMSON's leading implements. In general, the development has focused on a total weight as low as possible and a more limited range of options. SAMSON TG is available in a version with 18 and 20 m3.

Filling done easy with SAMSON Ejector
SAMSON TG will primarily use SAMSON's patented ejector vacuum pumping system, which can pump even the most demanding fluids. The system is widely used in several of SAMSON’s markets.

The vacuum is only generated in the ejector pipe system and not in the entire slurry tanker. This helps to minimize the weight of SAMSON TG just like with the current SAMSON PG II.

The ejector system can build a very high vacuum, under optimal conditions down to -0.9 bar. The SAMSON Ejector system has a filling capacity of up to 6000 L/min.

The SAMSON TG can be combined with several different filling systems: external filling through hopper placed at the top of the tanker - or with ejector combined with filling spout, hose with filling pump on the side of the tanker, via single or double articulated side arms (SAP1 and SAP2) or via a front arm pump placed on the front of the tractor (FAP).

Thus, SAMSON TG is excellently suitable both for slurry collecting and distribution from not easy accessible underground slurry stores or lagoons as well as of digestate.

Strong implement carrying construction
The SAMSON TG can be equipped with a SAMSON hydraulic 3-point hitch with a lifting capacity of 3.8 t. It can both lift and press on the implement including hydraulically stabilize the working depth of the implement.

– When developing SAMSON TG, the focus was on efficient and accurate slurry application with minimal maintenance, ease of use and high reliability. The tanker can be combined with most of the leading SAMSON implements and meets SAMSON's high quality standards. The built-in flexibility of implements gives the tanker wide use and high functionality, says SAMSON AGRO A/S product manager Niels Haubjerg.

The SAMSON TG will have a user-friendly and elegant control system. For the coming season, the tanker will be released in limited number in selected markets.

All news from SAMSON will be presented on stand A35 in hall 23 of this year's AGRITECHNICA. For the first time at an international exhibition, SAMSON and PICHON present themselves at a joint stand - bigger than ever before.

The list of news from both companies is long. Overall, the two companies can present eight innovations both on the control and on the machine side. One of the SAMSON news "NPK Sensor" for real-time measurement of NPK in slurry using NMR technology was awarded one 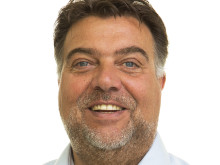 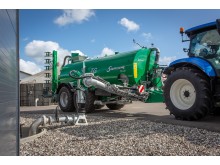