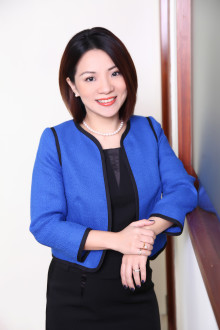 With an extensive experience in marketing, communications and branding, Ginny’s expertise is in marrying organisations’ brand and public perception with communications objectives, to develop holistic integrated marketing communication strategies. She spearheads strategic and stakeholder communications, and is well-versed in corporate PR and issues management.

Ginny’s clients range from Non-government Organisations to Multi-national corporations. She has raised public awareness and rallied calls for action in mass-scale events such as the Singapore Science Festival 2015, People’s Association’s Singapore’s Largest Groundbreaking for Tampines Town Hub, NTUC Club’s Fitter U Campaign and the People’s Association Launch of PAssion WaVe. She is instrumental in ensuring engagement with both the public and the immediate stakeholders on People’s Association’s Water-Venture Launch of Project Blue Wave.

She led the team in raising the profile of the Hari Raya Light Up 2014 and 2015, and built developer Qingjian Realty’s position as the developer of Singapore’s first private SMART homes. She has a passion for helping new businesses and brands get off the ground, running successful campaigns for Singapore’s own TruLife and Freshen Soups brands. With a passion and expertise in education, she also works closely with Nanyang Polytechnic, the National University of Singapore Business School and TUM Asia.

On the corporate front, she has driven corporate social responsibility initiatives for Samsung Electronics, and managed the launch of NTUC Club’s D’Resort. She counselled Mandai Link Logistics’ rebranding efforts, and subsequently spearheaded the publicity for the launch of Singapore’s first fully-automated freezer by the company. Ginny was involved in the conference by the Businesses for Families Council, and the World Entrepreneurship Forum. She is no stranger to the mass-sports scene, having worked on events like the labour movement’s Run 350 and U Run and Energizer Singapore Night Trail.

Prior to joining Asia PR Werkz, Ginny headed Marketing and Communications for NTUC First Campus, an early childhood organisation that was at the forefront of its field. In the area of communications, she was responsible for the strategic messaging and communications of the firm’s innovations and growth, on-going stakeholder relations and crisis communications. Ginny led education efforts to improve public perception of early childhood professionals. She also put in place a complex strategic communications strategy to re-brand and transform stakeholder perspectives of the organisation. She then managed the re-branding project, and communicated its re-branding to stakeholders in the government, corporate and public arena. Ginny holds a Bachelor in Business (Marketing) from the Nanyang Technological University, Singapore.

Cho Pei Lin is a pioneer in introducing Litigation PR to Singapore and her forte includes providing strategic PR consultancy in public... Show more
Wee Ling has expertise in key areas of communication in the fields of corporate public relations, lifestyle and trade, public policy... Show more
Julie Chiang’s passion and love for her job led her to take the road less trotted. She heeded the government’s call for... Show more