More than £5 million has been raised by a HM Revenue and Customs (HMRC) taskforce tackling dishonest dog breeders selling pups on the black market.

HMRC set up the taskforce in October 2015 after discussions with animal welfare groups suggested tens of thousands of puppies were being reared in unregulated conditions and sold illicitly every year.

Officers uncovered fraudsters selling puppies on a mass scale and for a huge profit, but because of the underground nature of the activity – failing to declare their sales.

Using a full range of civil and criminal enforcement powers, HMRC has recovered £5,393,035 in lost taxes from 257 separate cases since the formation of the taskforce.

“It is utterly appalling that anyone would want to treat puppies in such an inhumane way and on such a scale. It’s also deeply unfair to all of the legitimate businesses who do pay the right tax, and the total recovered by the taskforce is equivalent to the annual salaries for more than 200 newly qualified teachers.

“We continue to work hard with other government agencies and our partners to tackle these traders. We urge anyone with information about tax evasion to report it to HMRC online or call our Fraud Hotline on 0800 788 887.”

Of those breeders and traders targeted, they include:

Several arrests have been made in relation to the taskforce’s work over the past four years. Durham kennel owner, Kevin Knox, pleaded guilty to the fraudulent evasion of tax and VAT in March 2018.

HMRC is also involved in Operation Delphin – a multi-agency collaboration across the UK and Ireland, designed to tackle illegal puppy smuggling and the consequences it brings. It is led by the Scottish SPCA and includes partners such as the RSPCA, Ulster SPCA, Dublin SPCA, Irish SPCA, HMRC, Border Force, and the police.

The head of the Scottish SPCA’s Special Investigations Unit, who cannot be named due to his undercover operations, said:

"Unfortunately, the puppy trade is big business with thousands of dogs being brought into the country each year, particularly from Northern Ireland and the Republic of Ireland. It is a multi-million pound industry and many of these poor dogs are bred on large scale puppy farms with little to no regard for their welfare.

“We have seized 27 puppies smuggled from Ireland at Cairnryan Port in Dumfries and Galloway as part of Operation Delphin, which is dedicated to ending the illegal puppy dealing industry and bringing those who prioritise profits over animal welfare to justice. It’s a barbaric trade which commands huge profit from selling puppies. Often these puppies are kept in appalling conditions and this leads to injuries, health issues and behavioural problems. Some are so far gone that they pass away from complications due to the way they are bred and kept.

“The efforts of all involved in the taskforce have helped us to make inroads in to this brutal trade but it is a growing problem.

“Last year nearly half of all animals seized by the Scottish SPCA were rescued from puppy farms and I would urge everyone to sign the pledge #SayNoToPuppyDealers and send a clear message that this cruel trade has to end.” 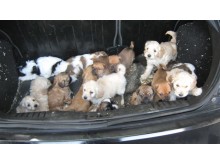 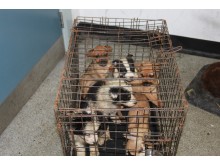 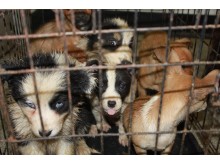