Two men, who were caught exchanging more than £100,000 in cash outside a Barnsley working men’s club, have been jailed after they were investigated for money laundering offences by HM Revenue and Customs (HMRC).

Pensioner John Rhinds, 72, of Bayview Crescent, Leven, Scotland, was observed by HMRC officers approaching a parked car and passing a supermarket ‘bag for life’ to barman Sean Wroe, 34, of Halifax Road, Barnsley, on 23 October 2014. The pair were arrested at the scene.

During interview, Rhinds claimed he had received an anonymous phone call two days earlier asking him to leave his car unattended at a fast food restaurant in Edinburgh while a parcel was loaded into the boot, with instructions to deliver it to the club. He added that he had driven the 230 miles without first checking the parcel was in the car, and with no knowledge that he was transporting cash.

“Both men gave a far-fetched version of events. It seems ridiculous that Rhinds would accept an anonymous call out of the blue, give an unknown person access to his car and then deliver a sinister package to a distant town – without even checking it was in the boot.

“This money was clearly the proceeds of crime, and today’s sentence serves as a reminder that HMRC will not tolerate people moving dirty money around the country at free will.”

Wroe, meanwhile, told HMRC investigators he had arrived for a shift at the club when an unknown male approached his car and passed a bag through the driver’s window. But the former steel worker changed his story during a second interview, telling officers he had actually been at the club to buy cannabis, and was only receptive to Rhinds because he believed he was delivering the drug.

Analysis of Rhinds’ mobile phone linked the pair, and despite his claim that he had never previously engaged in such a shadowy trip, roadside ANPR cameras later proved Rhinds had made an almost identical journey to Barnsley – just three days earlier.

Both men signed letters withdrawing their interest in the money, confirming they would not contest any future cash forfeiture, before pleading guilty to money laundering offences at Sheffield Crown Court on 2 December 2015. They were sentenced to 12 months in prison by His Honour Judge Kelson at the same court today, 20 January 2016. 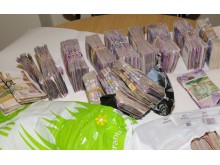 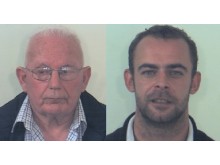