Experts and participants from the EC-funded Silver Santé Study today (Tuesday 14th May) gave evidence at the Mindfulness All Party Parliamentary Group’s inquiry into ‘Mindfulness, Ageing Well and Older People’.

Dr Antoine Lutz, a director of research at the French Institute for Medical Research (INSERM) in Lyon, France, presented the latest evidence in relation to meditation and its impact on healthy ageing to the Group. He also described the aims and scope of the ongoing EC-funded Silver Santé Study – a €7million research project investigating the impacts of mental training techniques, such as meditation and language-learning, on mental health and well-being in Europe’s ageing population. The 5-year project is led by Dr Gaël Chételat of INSERM in Caen, France.

Dr Lutz, who is the meditation lead for the project, said: “It was a privilege to be able to share the latest evidence on meditation and healthy ageing with the Mindfulness All Party Parliamentary Group at the House of Commons today.

“A pilot study published in 2017 showed potential for improving brain structure and function in later life - which is associated with reduced risk of Alzheimer’s – in a small group of expert meditators. If these results can be replicated in clinical trials with much larger cohorts it could be hugely beneficial to society in terms of improving mental health in later life.

“However, only a longitudinal clinical study in which participants are assessed before and after the intervention, such as the Silver Santé Study, will demonstrate that it is indeed the meditation intervention that is responsible for a positive impact on the brain.”

The Silver Santé Study, which began in January 2016, is running two clinical trials investigating mental health and well-being in later life, including Alzheimer’s disease and its mechanisms. The Study’s first trial, called SCD-Well, is assessing the effects of short-term meditation and health education interventions on behavioural measures. It includes 147 participants with some level of subjective cognitive decline who were recruited from memory clinics in France, Germany, Spain and the UK, with blood tests and questionnaires used to assess the impact of the interventions on cognition and well-being. The results of this trial, which is led by Dr Natalie Marchant of University College London (UCL), are currently being analysed and are due to be released later this year.

In the second trial, Age-Well, 137 healthy older adults aged 65+ in the Caen region of France have been randomly assigned to one of three groups – meditation, English learning or a control group in which participants have made no changes to their lifestyles. The 18 month interventions are the longest ever for meditation and language learning and the effects are being assessed through both behavioural and biological measures. These include blood sample analyses, questionnaires, cognitive tests, sleep assessment, neuroimaging data and lifestyle factors. Changes are measured between baseline readings and those at 18 and 21 months. A group of senior expert meditators has also been included in the study. The results of the Age-Well trial, led by the project’s Coordinator, Dr Gaël Chételat, are expected in 2020.

Dr Lutz was joined at today’s meeting by Harriet Demnitz-King, a Phd student working on the SCD-Well trial at UCL under the supervision of Dr Natalie Marchant, and Dr Thorsten Barnhofer, of the University of Exeter, who helped develop the Study’s meditation interventions. Also at the meeting were Jennifer Cleary, 61, and Jack Forsey, 75 – who took part in the meditation intervention of the London centre of the SCD Well trial. The two participants spoke about their own positive experiences of learning meditation as part of the trial.

Mrs Cleary said: “A while ago I went to a memory clinic to see if I had early signs of Alzheimer’s Disease. I was worried about my memory, especially as my mum got Alzheimer’s

Disease at an early age. Whilst there, I was asked if I would like to take part in research. I enjoyed the intervention a lot more than I expected.”

Dr Lutz added: “I am grateful to the Mindfulness All Party Parliamentary Group for giving the Silver Santé Study the opportunity to take part in their inquiry and we look forward to seeing the Group’s policy recommendations in due course.”

For further information about the Silver Santé Study visit the project website at www.silversantestudy.eu or watch the project’s 3-minute film here:

1. The Silver Santé Study is the public name of the Medit-Ageing Project.

2. The call under which the Silver Santé Study/Medit-Ageing Project has been successfully funded is H2020-PHC-22: Promoting mental well-being in the ageing population.

4.The partners in the Silver Santé Study/Medit-Ageing Project are: 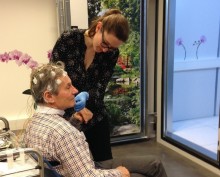 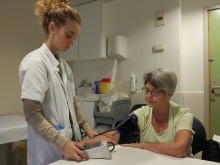 A volunteer undergoes tests as part of the Silver Santé Study's SCD-Well clinical trial into mental health in the ageing population. 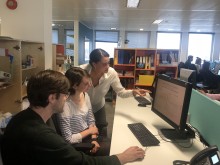 Dr Natalie Marchant of UCL (right) and her team examine the results of the SCD-Well clinical trial, which involved volunteers in the UK, ... 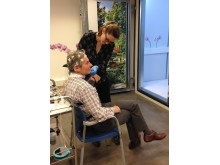 A volunteer being prepared for a sleep assessment in the Silver Santé Study. 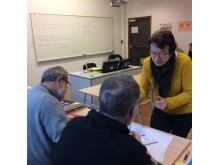 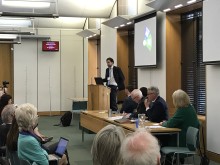 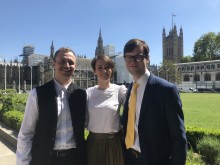