Animals need to breed at the time of year when their progeny have the best chance of survival. In a study published today in PNAS, scientists in Sweden and Canada have studied the genetic basis of reproduction in 25 populations of herring from both sides of the North Atlantic. They revealed a number of genes associated with the timing of reproduction, and the genetic variants associated with spring or autumn spawning were found to be largely shared between geographically distant populations.

The Atlantic herring is one of the most abundant fish in the world and has been a crucial food resource in Northern Europe. The Atlantic herring spawns in the spring, summer or autumn. Which strategy is the most successful varies from year to year and over time periods due to climate conditions that affect plankton production.

“This new study has given several interesting results. Firstly, we have revealed that herring populations across the entire Atlantic Ocean are remarkably similar genetically, suggesting that there is gene flow between herring populations. Despite this, we identified clear genetic differences between spring and autumn spawning populations. Furthermore, the genetic factors associated with spawning time were to a large extent shared between geographically distant populations,” explains Sangeet Lamichhaney, former PhD student at Uppsala University (Sweden) and shared first author on the paper.

“We now have a long list of genes associated with timing of reproduction in the herring and there are some that appear particularly important,” says Leif Andersson, Professor at Uppsala University, the Swedish University of Agricultural Sciences and Texas A&M University, who led the study.

“One of the most interesting genes is TSHR (thyroid-stimulating hormone receptor) because previous studies in birds and mammals have indicated that this gene has a key role in how animals time their reproduction in response to changes in day length. The fact that TSHR was the gene that showed the most consistent association with spawning time in the herring suggests that it has a similar role in fish. An important topic for future research is to reveal the molecular mechanism of how increasing day length leads to the initiation of spawning in spring spawners, whereas this response is delayed until August–September for autumn spawners,” concludes Leif Andersson.

The study has significant implications for how climate change may affect the reproduction of herring and other marine fishes. It has already been observed in some birds that there is a mismatch between their reproduction and the peak of insect abundance due to a warmer climate (earlier spring).

“We think that the Atlantic herring has a capacity to respond well to at least moderate changes in the climate,” says Angela Fuentes-Pardo (Dalhousie University, Canada), a PhD student and shared first author on the paperinvolved in the study. “Firstly, spawning time is not strictly genetically determined. Herring show some plasticity and adjust spawning time according to the water temperature. Secondly, our data suggest that there is a considerable amount of genetic variation affecting spawning time so the herring should be able to adapt genetically to moderate climate changes.”

The study also has important implications for fishery management of the Atlantic herring.

“By providing genetic markers that distinguish spring and autumn spawning herring outside the breeding season, a more sustainable fishery can be developed by optimising fishing among stocks according to their abundance,” explains Professor Daniel Ruzzante (Dalhousie University, Canada), one of the senior authors of the study. 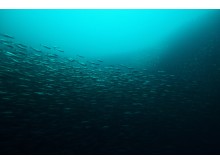 Shoal of Atlantic herring at the Norwegian coast (Photo by Per Eide from the film The Silver of the Sea by blaastfilm.no). 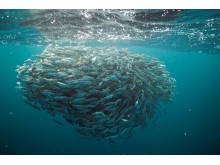 Atlantic herring forming a ball in the presence of predator (Photo by Per Eide from the film The Silver of the Sea by blaastfilm.no).