Film Afrika, one of South Africa’s leading television and film production and servicing companies, is pioneering the move towards environmental sustainability by using unique mobile water purification trailers from Bluewater on the set of Raised By Wolves, TNT’s highly anticipated serialized sci-fi series from master storyteller and filmmaker Ridley Scott (The Martian, Blade Runner, Alien: Covenant), which marks his television directorial debut. The Raised by Wolves series is currently in production in the Western Cape.

The Bluewater Trailers are keeping the 400-strong crew hydrated during the peak of the South African summer and since December have already eliminated the use of almost 50 000 single-use plastic water bottles on set. Throughout the duration of the production it’s estimated that the Bluewater Trailers could reduce single-use plastic waste by up to 581 818 bottles, while significantly lowering the drinking water cost to the production company.

Mobile water station
The Bluewater Trailer is a mobile water station dispensing purified, non-potable chilled water that is either still or sparkling. Bluewater’s flagship product, the pioneering and industry-leading Bluewater Pro 400, harnesses a patented second-generation reverse osmosis purification process called SuperiorOsmosis™ that can generate up to 7,000 litres of pure water every day including from normally tough-to-purify brackish water or borehole water.

Raised by Wolves crew members, working since 2018 on an isolated outdoor site, are each refilling a multi-use water bottle with still or sparkling chilled water dispensed from Bluewater Trailers located in multiple positions around the set. In the initial set-build period alone, from 3 December 2018 to 1 February 2019, approximately 16 238 litres of water were provided to the set, the equivalent of around 49,215 330ml single-use plastic water bottles. Furthermore, because the water provided by Bluewater is sourced and purified from a non-potable supply, Raised by Wolves is not impacting Cape Town’s water scarce municipal water resources – something close to the hearts of both Bluewater and Raised by Wolves. 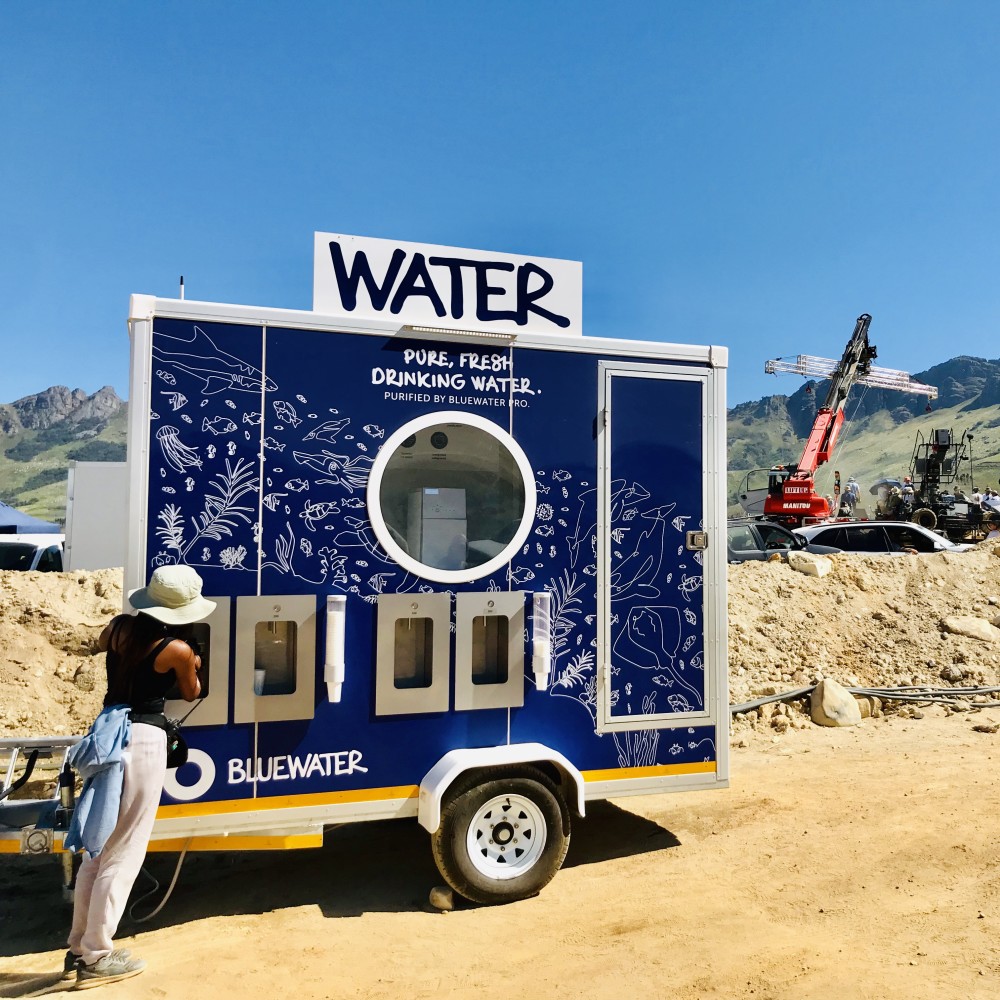 Thrilled by solution
Unit and Transport Head Grant Kilian, one of the many “Water Warriors” working on Raised by Wolves, has championed this initiative: “We are thrilled with this solution. We are not using municipal water and we are eliminating the use of a massive amount of single-use plastic that we otherwise have to transport to and from site at significant cost. We have saved a huge amount of money by replacing all those bottles with the Bluewater Trailer water and the crew are raving about having chilled still and sparkling water on tap. We look forward to seeing the overall saving after the estimated eight months of production.”

For some time now, key role players in the South African film industry have acknowledged the critical need for a unified front adopting measures to mitigate the environmental impact of film productions, and Raised by Wolves aims to assist in developing a model for responsible, sustainable film production.

With the assistance of Wrap Zero and GreenSet - under the umbrella of the SA FILM Academy - together with a passionate, dedicated team of consultants, suppliers, management and crew, the aim is to implement a holistic, integrated, environmental sustainability pilot project throughout the course of this production, with Bluewater Trailers playing a vital role.

More sustainable
Bluewater launched their trailer service in September last year and has been assisting some of South Africa’s large-scale events, like the Sanlam Cape Town Marathon and Rocking the Daisies, to become more sustainable by reducing their use of single-use plastic while simultaneously lessening their impact by not using municipal water sources.

“Sustainability and innovation are at the heart of Bluewater’s business mission and to partner with Film Afrika on such a large-scale and ambitious production as Raised by Wolves, right here in the Cape, is a special opportunity for us. We are incredibly proud to showcase the best of Swedish water purification technology in the Bluewater Pro with the best of Bluewater ingenuity in the Mobile Water Trailer, to serve refreshing and great-tasting water to people working in very testing conditions on set,” said James Steere, Executive Director for Bluewater’s operations in Africa.

“Our work with the Raised by Wolves production team is demonstrating what a true commitment to single-use plastic waste reduction can achieve. It is inspiring for all of us in the Bluewater team and we hope that the film and television industry will take note that reducing environmental impact makes good business sense with a superior product offering that also boosts the bottom line.”

Ideal for production sets
Bluewater Trailers are an ideal solution to the on-set drinking water needs for large groups of people involved in short- and long-term productions. Bluewater, a global water purification technology and products manufacturing company with international head offices in Sweden, is now bringing the Bluewater Pro technology to South Africa, as well as serving the events industry with the Bluewater Mobile Trailer.

Bluewater is a world leading water purification company with its global headquarters in Stockholm, Sweden. Bluewater innovates, manufactures and comercializes compact water purifiers for residential, business and public use that harness the company’s patented reverse osmosis technology to remove virtually all pollutants from tap water, including lead, bacteria, pesticides, medical residues, chlorine and lime-scale. Please visit us at www.bluewatergroup.com