The infernal boys are back! On the 3rd of April, Lucifer Star Machine will release their fourth album, “The Devil’s Breath” on The Sign Records. A straight-shooting record filled with thirteen tracks guaranteed to turn every listener into a full steam ahead Rock’n’Roll machine, released on Vinyl, Deluxe Vinyl, CD and digital format. The band also announces a music video for their single "Dwell in Misery", which will be premiered on German Rock Hard on the day of the album release.

“The Devil’s Breath”, is a 42-minute long road to hell that lures the listener with huge choruses, infernal riffs and monstrous melodies presented with the band’s trademarked straightforward, no - bullshit attitude; perfectly visualized in the album cover artwork of Łukasz Jaszak. The Polish artist has added a vintage horror magazine look which compliments the music and positions the band among the big boys of Rock’n’Roll: Motörhead, Ramones, Social Distortion, Volbeat and Turbonegro!

There is no doubt that Lucifer Star Machine has outdone themselves on their fourth full-length. A prime Rock album that sets the standard for the ’20s, “The Devil’s Breath”, is a high energy mixture of Classic Rock, Punk, a touch of Metal and a hint of 50’s Rock’n’Roll. A highly entertaining package combining raw, heartfelt music with great musicianship and addictive hooks.

The record holds a new and more accessible approach for the band, with a lot of time spent on creating strong and catchy vocal lines, musical layers, effects, and even piano parts. The record’s production is warmer and more powerful than any of the band's previous outings with a lot of focus on the mix. Lucifer Star Machine has achieved a more dynamic and compelling guitar sound without overblown distortion, that supports and emphasizes the incredible guitar work.

“The Devil’s Breath” is an album full of honesty, heart, and soul with a fantastic storyline captured in every lyric. A new era for Lucifer Star Machine, it’s time to Get Lucified!

Watch the Music Videos for the singles:

"Baby, When You Cry"

"The Devil's Breath" will be released worldwide by The Sign Records April 3rd, 2020 on Vinyl, Deluxe Vinyl, CD and Digital formats. Distributed by:

Almost Religious is an independent label group, managing Lövely Records, The Sign Records, Gaphals, Daughters and Sons Records and Religious Vömit. We release music by Swedish and International artists and bands on physical and digital formats and have worked with releases by Hällas, MaidaVale, The Dahmers, MCC, Priest, Honeymoon Disease, and Svartanatt to name a few.

Prior to publication, it must be approved by Almost Religious AB. 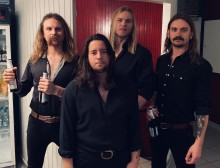 Swedish rockers Night releases their 7" single "Feeling it Everywhere" on The Sign Records on the 3rd of April. The single contains 2 songs - the title track as well as "King of the Night". Night also announces a 15 date European tour with adventure rockers in Hällas. The tour was planned for the spring of 2020 but is, due to corona, postponed to September this year. 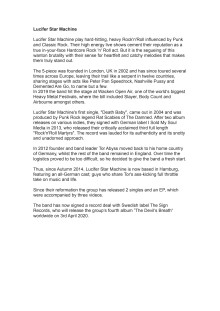