Paris, 15 January 2016 – Eutelsat Communications (NYSE Euronext Paris: ETL) announces that the EUTELSAT 9B satellite is on track for launch by an ILS Proton rocket on 28 January. Lift-off of the five-ton satellite built by Airbus Defence and Space is scheduled at 04:19 am Baikonour time (January 27 - 22.19 GMT, 23.19 CET). The first of three Eutelsat satellites to launch in 2016, EUTELSAT 9B will be followed into space by EUTELSAT 65 West A and EUTELSAT 117 West B.

EUTELSAT 9B is a high-capacity Ku-band satellite for the 9° East position that sits at the crossroads of Europe’s leading video neighbourhoods. Overall Eutelsat capacity will increase to 50 physical transponders (47 equivalent 36Mz transponders)to take this neighbourhood to a new level of performance. EUTELSAT 9B will address high-growth broadcast markets through one pan-European footprint delivering wide coverage and four regional footprints serving Germany, Greece, Italy, and the Nordics with the Baltics and Ukraine. The satellite will replace EUTELSAT 9A that has built a diverse line-up of over 350 channels, of which 100 in High Definition, broadcasting to cable, DTH and DTT homes across Europe and serving clients that include M7 for the KabelKiosk and AustriaSat Magyarország platforms as well as OTE, AFN, Arqiva, Globecast, Media Broadcast and RR Media.

EUTELSAT 9B also hosts EDRS-A, the first node of the European Data Relay System (EDRS) for ESA and Airbus Defence and Space. This new SpaceDataHighway will significantly speed up the flow of information between low-orbit satellites and their ground stations, improving reaction time for a wide range of operations such as disaster monitoring, emergency operations and coastal and maritime surveillance. The EDRS-A payload hosted on EUTELSAT 9B comprises a laser communications terminal and a Ka-band inter-satellite link that will retrieve high volumes of data sent from low orbit satellites as well as airborne platforms and a Ka-band antenna to transmit the data from geostationary orbit to EDRS ground stations.

Established in 1977, Eutelsat Communications (Euronext Paris: ETL, ISIN code: FR0010221234) is one of the world's leading and most experienced operators of communications satellites. The company provides capacity on 39 satellites to clients that include broadcasters and broadcasting associations, pay-TV operators, video, data and Internet service providers, enterprises and government agencies.

Eutelsat’s satellites provide ubiquitous coverage of Europe, the Middle East, Africa, Asia-Pacific and the Americas, enabling video, data, broadband and government communications to be established irrespective of a user’s location.

Headquartered in Paris, with offices and teleports around the globe, Eutelsat represents a workforce of 1,000 men and women from 37 countries who are experts in their fields and work with clients to deliver the highest quality of service. 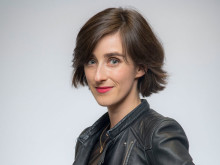