Four leadership changes will take place at the Goetheanum by Easter 2020. Ueli Hurter has been appointed as the fifth member of the Executive Council. This appointment still requires the approval of the General Assembly in April. The leadership positions of the Natural Science Section, the Visual Arts Section and the General Anthroposophical Section will also be newly filled.

As of January 1st , 2020, Christiane Haid will take over from Marianne Schubert (retired) as head of the Visual Art Section, in addition to her leadership of the Section for the Literary Arts and Humanities. Also, at the beginning of the year, physicist Matthias Rang and biologist Johannes Wirz will succeed Johannes Kühl (also retired) as head of the Natural Science Section. Starting at Easter 2020, Constanza Kaliks, Claus-Peter Röh and Peter Selg will take over the hitherto vacant leadership of the General Anthroposophical Section. Until then Joan Sleigh will coordinate the work on a provisional basis.

With these changes in leadership, the Goetheanum leadership is drawing on proven personalities who are closely linked to the practical side of the challenges facing society and who know the Goetheanum well through their work.

The Goetheanum is the headquarters for the School of Spiritual Science and the General Anthroposophical Society. The School of Spiritual Science with its eleven sections is active worldwide in research, development, teaching, and the practical implementation of its research findings and is supported by the Anthroposophical Society.

Prior to publication, it must be approved by Goetheanum. 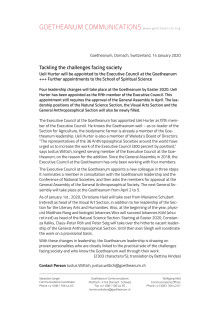