During a busy week every spring, Sweden's beer capital, Göteborg, bustles with beer related activities in restaurant, pubs and local breweries. And since 2016, different local breweries have produced the official beer for Gbg Beer Week. This year it’s Dugges turn to do the honors, and they have decided to create a sour strawberry ale.

"Dugges has for a long time meant a great deal for the Gothenburg beer scene and they make amazing beer," says Fredrik Berggren, one of the initiators behind the Gbg Beer Week about why Dugges was approached about making this year’s official beer.

In 2018, Gbg Beer Week will take place March 30 – April 7. It is a grassroots driven initiative and the official beer is the only source of income for covering promotion costs. Today it is revealed that Dugges will brew the third edition of the official GBG Beer Week.

The brewery is free to create a beer in any style it wants. And this year Dugges decided to create a sour fruit beer.

"When we got asked to do the official GBG Beer Week beer, we got tunnel vision. All we could think about was sour strawberries. And so it had to be, a strawberry sour,” says Tomas Halberstad from Dugges Bryggeri.

"Things are getting really sour in the craft beer world, with more and more breweries cranking out their take on the style. And sours really have the potential to recruit new consumers into the craft beer world"," says Petur Olafsson, initiator of Gbg Beer Week.

“There is already a legacy to preserve when making the official beer. And when Gbg Beer Week received the award for Swedish Beer Culture Developer of The Year, we felt that continuing that legacy is even more important. With our Strawberry Sour, we want to build on what has been done before, but also do something quite different. Something unique. It’s important that it represents both Gbg Beer Week and Dugges,” says Tomas Halberstad.

The beer will be premiered on the first day of Gbg Beer Week, Friday March 30 at 5 p.m.

A week later (Friday April 6), the beer is released in Systembolaget's temporary assortment of exclusive products (TSE) and is then available nationally in Sweden.

Gbg Beer Week is a grassroots driven beer week, that is arranged yearly in Gothenburg, Sweden. The week was initiated in 2014 by the beer enthusiasts Petur Olafsson and Fredrik Berggren with the aim of celebrating the diversity of craft beer culture. The goal of is to make the city's beer culture flourish even more and get more people to discover craft beer. The main goal is to put a movement in motion, where events organized by breweries, importers, restaurants, pubs and organizations will make the city buzz with excitement around craft beer. Gbg Beer Week is arranged in connection to the En Öl & Whiskymässa (A Beer & Whiskey Fair), which gathers over 22 000 beer enthusiasts in Gothenburg.

Gbg Beer Week received the award for Swedish Beer Culture Developer of the Year in 2017. 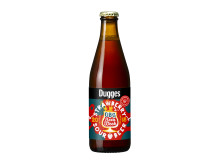