On March 11, Picadeli launches their first concept restaurant at Hötorget in Stockholm. The opening is a major step in Picadeli’s successful journey of putting the future of fast food on the map and another achievement in the ambition for growth in Europe. ”We want to continue to challenge the definition of fast food”, says Kristoffer Sunér, Head of Food Development at Picadeli.

The salad bar-company Picadeli does not only challenge the traditional fast food arena in its new restaurant concept “Urban Picnic”, but also the concept of fast food in general. The new restaurant will be part of the pulse at Hötorget, which is reflected in an innovative fast food restaurant designed for guests on-the-go, as well as for those who wants to sit down and enjoy their handpicked salad. Self-check-out for a faster and smoother experience and an interior inspired by the urban, local environment with materials in the form of plants, wood and concrete – brings the guest into the 2020s. Behind the design is the award-winning design- and architectural firm Spik Studios.

The innovative section named ”Toppings & Cravings”, highlights the flavors and strives to give the guests taste buds a new dimension. Picadeli maintains a clear climate focus through an innovative range of plant-based proteins, more sustainable and healthy products by season, and packaging consisting solely of compostable or recycled, renewable material.

– Our very own restaurant concept gives us a new platform to develop everything from new flavors to innovative products and experiences even faster. By doing this, the whole Picadeli concept is pushed forward without forcing anything on our business idea – to handpick your own salad – it feels fantastic, says Kristoffer Sunér, Head of Food Development.

The Swedish-owned Picadeli continues its journey for growth and leads the market for
self-picked salads in Europe. In 2019, over 42 million salads were sold, which is more than one salad per second, and an increase in sales by 16 percent compared to the previous year. Focusing on food-tech and plant-based proteins, Picadeli will continue its expansion in 2020 on new markets, in stores and trough additional fast food restaurants. These are mainly concentrated in Continental Europe and the next opening takes place in La Défense, Paris.

– This is an important step to show that fast food can mean fantastic flavors, being offered through the freedom of choice in an exciting atmosphere. Fast food can definitely be both healthy and fresh. That has been our belief since day one and we intend to continue to challenge the definition of fast food, Kristoffer Sunér continues.

Picadeli’s restaurant opens to the public at 11 am on March 11 and is located at Hötorget metro station, the intersection of Sveavägen–Kungsgatan. 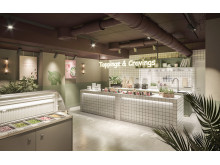 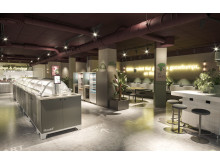