A group of researchers at Chalmers University of Technology have managed to print and dry three-dimensional objects made entirely by cellulose for the first time with the help of a 3D-bioprinter. They also added carbon nanotubes to create electrically conductive material. The effect is that cellulose and other raw material based on wood will be able to compete with fossil-based plastics and metals in the on-going additive manufacturing revolution, which started with the introduction of the 3D-printer.

3D printing is a form of additive manufacturing that is predicted to revolutionise the manufacturing industry. The precision of the technology makes it possible to manufacture a whole new range of objects and it presents several advantages compared to older production techniques. The freedom of design is great, the lead time is short, and no material goes to waste.

Plastics and metals dominate additive manufacturing. However, a research group at Chalmers University of Technology have now managed to use cellulose from wood in a 3D printer.

“Combing the use of cellulose to the fast technological development of 3D printing offers great environmental advantages,” says Paul Gatenholm, professor of Biopolymer Technology at Chalmers and the leader of the research group. “Cellulose is an unlimited renewable commodity that is completely biodegradable, and manufacture using raw material from wood, in essence, means to bind carbon dioxide that would otherwise end up in the atmosphere.”

The breakthrough was accomplished at Wallenberg Wood Science Center, a research center aimed at developing new materials from wood, at Chalmers University of Technology.

The difficulty using cellulose in additive manufacturing is that cellulose does not melt when heated. Therefore, the 3D printers and processes designed for printing plastics and metals cannot be used for materials like cellulose. The Chalmers researchers solved this problem by mixing cellulose nanofibrils in a hydrogel consisting of 95-99 percent water. The gel could then in turn be dispensed with high fidelity into the researchers’ 3D bioprinter, which was earlier used to produce scaffolds for growing cells, where the end application is patient-specific implants.

The next challenge was to dry the printed gel-like objects without them losing their three-dimensional shape.

“The drying process is critical,” Paul Gatenholm explains. “We have developed a process in which we freeze the objects and remove the water by different means as to control the shape of the dry objects. It is also possible to let the structure collapse in one direction, creating thin films.”

Using the two gels together, one conductive and one non-conductive, and controlling the drying process, the researchers produced three-dimensional circuits, where the resolution increased significantly upon drying.

The two gels together provide a basis for the possible development of a wide range of products made by cellulose with in-built electric currents.

“Potential applications range from sensors integrated with packaging, to textiles that convert body heat to electricity, and wound dressings that can communicate with healthcare workers,” says Paul Gatenholm. “Our research group now moves on with the next challenge, to use all wood biopolymers, besides cellulose.”

The research findings are presented this week at the conference New Materials From Trees that takes place in Stockholm, Sweden, June 15-17.

Caption: The tiny chair made of cellulose is a demonstrational object, printed using the 3D bioprinter at Chalmers University of Technology. Photo: Peter Widing

Chalmers University of Technology conducts research and offers education in technology, science, shipping and architecture with a sustainable future as its global vision. Chalmers is well-known for providing an effective environment for innovation and has eight priority areas of international significance – Built Environment, Energy, Information and Communication Technology, Life Science Engineering, Materials Science, Nanoscience and Nanotechnology, Production, and Transport.
Graphene Flagship, an FET Flagship initiative by the European Commission, is coordinated by Chalmers. Situated in Gothenburg, Sweden, Chalmers has 10,300 full-time students and 3,100 employees. 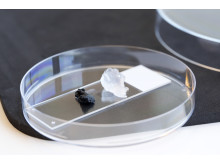 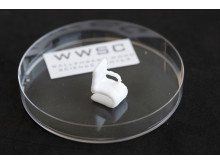 The tiny chair made of cellulose is a demonstrational object, printed using the 3D bioprinter at Chalmers University of Technology. 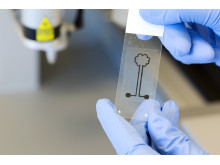 A circuit made up of cell...

The circuit in the form of a tree is made up of cellulose, which has been made electronically conductive by means of carbon nanotubes, an... 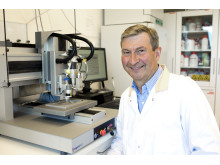 Paul Gatenholm next to the 3D bioprinter at Chalmers University of Technology.