Despite only being launched into the UK market in 2013 the growing popularity, as well as food industry and consumer reaction to CELIA gluten-free Czech craft pilsner is going from strength to strength.  CELIA now boasts a prestigious ‘Best Gluten Free Beer’ accolade at the 2013 FreeFrom Food Awards.  CELIA co-founders Nick McNally and Martin Vozar were presented with the award in London by celebrity chef Antony Worrall Thompson and the panel of judges verdict on the gluten-free beer states: "Very clear, not much head but tastes great. Pleasant feel in the mouth, lovely sweet taste after a few mouthfuls, refreshing, clears palate. Lager drinkers will like this."

"We get a lot of excellent feedback from gluten-free consumers, bars and restaurant owners, major retailers and FreeFrom bloggers who consistently comment on how wonderful it is to have not only a gluten-free Czech craft pilsner on the market for the first time, but furthermore a lager whose flavour and quality exceeds that of other gluten-free lagers" explains Nick McNally.

CELIA is already listed in a host of London's top restaurants that offer gluten-free foods and the company’s three year plan is: “To be listed in all of the wonderful gluten-free eateries our fans have been telling us about across the UK and Ireland" says Nick McNally.

CELIA is currently in negotiation with major retail chains and supermarkets who share the company’s philosophy as Nick explains: "We’ve identified potential partners who share our priorities:  great customer service, quality gluten-free offerings and a sense of fun.  We want our fans to be able to access CELIA nationwide and hope relations with our brand evangelists will strengthen as we expand CELIA events such as:  pop-ups, sports and arts sponsorship so that everyone knows CELIA is synonymous with a great time" says Nick McNally.

Co-founder Martin Vozar adds:  "I would like to see CELIA featured on the menus of prestigious hotel chains and high end supermarkets nationwide with the CELIA website becoming a “go-to” gluten-free restaurant guide."

"We are delighted to be serving CELIA", says Andrew Fishwick, owner of The Truscott Arms, in Maida Vale, London. "It's wonderful to have a beer that we have found is enjoyed by both coeliacs and those not of a gluten free diet. It's proven very popular with our regulars, many of whom are very surprised that it is in fact gluten free!"

CELIA is currently available in a number of restaurants and bars mainly in the London area, as well as online stores accessed via CELIA's own UK website. For a full list of current stockists follow the links below:

Forthcoming events in the CELIA calendar include on May 11th CELIA launch with a gourmet gluten-free dinner at the 5* Hoo hotel located south of Luton in Bedfordshire – click here for more information and tickets or visit http://www.celialager.co.uk/hoohotel/

June 7th to 9th 2013 The London Allergy and FreeFrom Show at Olympia – click here to get your free ticket courtesy of CELIA or visit http://www.allergyshow.co.uk/go/celialager

THE STORY OF CELIA LAGER

CELIA gluten-free lager is the result of a unique patented 59 day craft brewing process.  It has the added benefit of containing only natural carbonation thanks to being craft brewed in open fermentation ‘squares’.  Many breweries strive for increased volume and thus accelerate fermentation by using closed tanks resulting in the need to add CO2; mainstream brewers even go as far as making stronger batches and then watering down the beer.  Zatecky Pivovar, brewer of CELIA in the Czech Republic strictly bans this technique following their 200 year old brewing principles.  After 14 days of open fermentation CELIA is transferred into horizontal lagering tanks which are sunk deep beneath the brewery.  Carved into the rock these cellars remain naturally cold at a consistent temperature; a crucial factor in allowing the de-glutenising enzyme to work its magic.

Restaurants and bars love the CELIA story as with one product they can attract new customers through a gluten-free offering whilst also offering craft lager drinkers and health conscious consumers a fantastic new experience.

CELIA takes being different one step further as Zatecky Pivovar are based in Zatec, the home of Saaz hops and the world’s premier Hop Institute as well as the Czech Research Institute of Brewing and Malting.

This location means CELIA benefits from Zatecky Pivovar being the only brewery in the world to brew with 100% Saaz noble hops as they are grown locally in Northern Bohemia’s mineral-rich red soil.  Saaz hops are world famous and are used in premium pilsners globally such as Asahi and Cusquena.  However none of these brands are able to use 100% Saaz hops due to their expense.  Saaz is the champagne region of lager brewing as the local hops produce a beautiful clean, spicy bitterness which combined with the lack of gluten and natural carbonation makes CELIA an ideal accompaniment to quality food, something that has driven sales as restaurant owners discover that it is not only wine can be matched with food.

All the malted barley is two-row spring barley grown in Moravia, a region between Bohemia and Slovakia which is famed for its lush fertile soil enriched by a seven-strong lattice of rivers.  The water however comes from elsewhere; it is sourced and sand-filtered from 15m below the brewery cellars.

Martin Vozar, co-founder, was key to bringing CELIA to the UK:  "During the opening of my fine dining gluten-free restaurant in Prague I searched for a brewery with an excellent heritage and local focus that truly cared about producing an outstanding gluten-free beer.  Zatecky Pivovar, brewer of CELIA, in the town of Zatec 45 minutes north of Prague fitted this bill perfectly with Czechoslovakian Brewmaster and former Head of the Czech Research Institute of Brewing and Malting Tomas Leisek focused on the unique challenge of creating a true Czech pilsner that had the benefit of being gluten-free.  Working with Zatecky to release their first ever tap version in my restaurant Na Zlate meant I built a great relationship with them allowing me to illustrate to them the potential of CELIA in the UK market when I moved to Brixton in early 2012."

Nick McNally met Martin by chance, choosing to share a flat with him and 2 others.  Upon trying CELIA Nick decided to go into a venture with Martin to build a fun brand associated with great food:  "I love brands and beers as well as having done  volunteering work.  So after tasting CELIA and visiting Zatecky Pivovar and seeing their 200 year history, the great work they do supporting the community, training staff and buying only local ingredients I saw this as a great opportunity to fill a gap in the UK market and to convince regular lager drinkers that a lack of gluten creates a lighter more enjoyable lager.  Since CELIA is the only lager in the world with no gluten, only natural carbonation and 100% Saaz hops I struggle to drink other lagers now".

Prior to publication, it must be approved by CloseUp PR.. 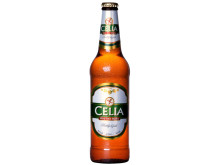 CELIA lager is delighted to have won ‘Best Gluten Free Beer’ at the prestigious 2013 Free From Food Awards, presented by Antony Worrall T...