The world’s greatest Big Air stars: Henrik Harlaut and Tanner Hall in the company of many others are in place in Åre to take part in the 2013 edition of Jon Olsson Invitational - JOI. The event now also includes the parallel slalom competition Betsafe Alpine Challenge, BAC, with many contestants from the men’s alpine elite. The background to this inclusion is  the wager between freestyle legend Jon Olsson and new co-organiser and alpine ski ace Jens Byggmark.

Jon Olsson Invitational is hitting Åre this weekend for the eighth time, adding higher kicks and sharper tricks by the year; always presenting the uppermost world elite riders. This year will see the participation of X-Games winner and Åre resident Henrik Harlaut head to head against other super stars such as Tanner Hall. Jon Olsson has previously declared that the level of this year’s JOI will be the highest ever.


-  The kick is 1.20 metres higher than last year’s and in perfect shape. I’m pretty sure we are going to see really spectacular jumps, at least triples to make it to the final. I am super-stoked that both Henrik Harlaut and Tanner Hall are here for the event. And of course, it is so important for me to beat Byggmark in the parallel slalom race, says Jon Olsson.

Following a wager with his mate, alpine ski racer Jens Byggmark, Jon Olsson a few years ago resumed his alpine career with the objective to qualify for the Swedish Giant slalom team to the Olympic Winter Games in Sochi 2014. On the back of this, JOI has grown to also include the parallel slalom race Alpine Challenge, which, starting from this year, is co-organised by Jens Byggmark.


-  I feel great being here in Åre as a partner and to present a great show in favour of skiing. I also love that it is a town event staged in the evening. It will be a great show for the spectators. But most important of it all is to beat Jon, says Jens Byggmark.

About the event:
The 5-6 April will see Jon Olsson Invitational (JOI) and Betsafe Alpine Challenge (BAC) being staged in Åre, JOI for the eighth time running, Alpine Challenge for the third consecutive year. 30 of the world’s best riders will strive for the best Big Air jump while 16 of the world’s best alpine racers take part in the prestigious parallel slalom race. The events run concurrently.

JOI and BAC both admit free access to the spectators and the venue for both is the National Alpine Arena adjacent to the VM8 lift in central Åre.

Poster signing at Åre Square on Saturday 6 April at 14.00.

About SkiStar:
The SkiStar AB (publ) B shares are listed on the Nasdaq OMX Mid Cap Stockholm; the group owns and operates the ski resorts at the alpine skiing destinations Sälen, Åre and Vemdalen in Sweden together with Hemsedal and Trysil in Norway. The market share in Sweden amounts to 50%, in Norway 29% and overall in Scandinavia 41%. The group’s core business is alpine skiing with the guests’ experience in focus. The list of other activities includes accommodation agency, ski schools and ski rentals. 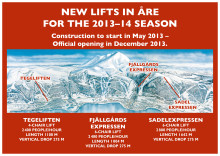 With one of the most significant investments in lifts ever made in Åre, next season will see the addition of no less than three modern chairlifts. The new lifts will boast capacity in the ski area with about 5 000 persons and further improve the skiing experience in the zone below the treeline. The building work will commence in May, and opening of the three new lifts will be in December 2013.

SkiStar Åre: Skiing and big events in Åre until 1 May

The snow has hardly yet turned into sorbet on the slopes in Åre since temperatures, despite a long period of sunny days have stayed mainly below zero. This has resulted in magic skiing conditions. We are now looking forward to playful slushy conditions but with cold snow further up on Mt Åreskutan and several big events such as classic Freeride and the popular downhill race Skutskjutet.