New car sales figures1 released today reveal that the majority of the most popular cars in Britain now offer five-star crash protection, but standard fitment of Autonomous Emergency Braking (AEB) is still only available on half of them.

Analysis by independent safety experts, Thatcham Research, confirms that five of the current Top 10 UK best-sellers now offer some level of AEB fitment as standard, although worryingly only one has the crucial crash prevention technology on every model and trim level in its range.

Monitoring the road ahead using sensor and camera technology, AEB has been shown to reduce low-speed crashes by up to 40% by automatically braking to avoid a collision with another car or a pedestrian, if the driver hasn’t responded.

AEB is still not available at all on more than half of all new cars (52%) on sale in the UK and the best-selling models need to be setting an example to change this, according to Thatcham Research Chief Executive, Peter Shaw:

“It is right to acknowledge the achievements of car makers in providing us with safe cars that offer excellent protection in the event of a crash, with eight of the Top 10 best-sellers having Euro NCAP 5 star ratings. However, preventing the crash from happening in the first place now must be the focus and that starts with having AEB as standard. Prioritising fitment to the best-sellers will make the biggest contribution to reducing the number of crashes on our roads, as well as encouraging other car makers to follow suit.”

Mixed results on Safety as Standard
The Mercedes C-Class has AEB as standard across its entire range, whilst the Volkswagen Golf and the Nissan Qashqai also have commendable levels of standard fitment (83% and 71% respectively) and optional availability on most other trim levels.

At the other end of the spectrum, the Vauxhall Corsa – the UKs second best-selling car – is not available with AEB at all and the No.1 best-seller, the Ford Fiesta, only offers the technology as an optional extra, and this on only just over half of the model range.

“With combined sales of the Fiesta and Corsa totalling over 100,000 in the first 6 months of this year alone, there’s a great opportunity to provide standard fit crash prevention for the masses,” says Shaw.

Superminis are likely choices of car for young, inexperienced drivers who are 26 times2 more likely to be involved in a crash. Yet, the size and price of a car do not have to be barriers to AEB fitment, says Shaw: “Honda has shown that standard fit AEB safety at supermini price level is achievable, with the new Jazz having it across the entire range.”

Shorter model replacement cycles may make it easier for car makers to upgrade their safety offer and Thatcham Research believes that they must take more advantage of these opportunities.

“The new Fiesta is expected next year and gives Ford the opportunity to redress the balance by making AEB standard,” comments Shaw. “And having already shown with the Astra that it recognises the value of the technology, Vauxhall should be targeting at least a similar level of fitment on all future versions of its other models.”

Thatcham Research is calling on all car makers to embrace the highest levels of active safety technology, as Peter Shaw explains, “Vehicle manufacturers could choose to publicly commit to making AEB standard by 2022 on all new cars sold in the UK. Twenty of the best-known car brands have already done exactly that in the United States and we’d welcome the same commitment in the UK.”

Car buyers with their heart set on a car where standard fit AEB is unattainable are encouraged to explore optional safety packs that include AEB, alongside other valuable safety features. To make this easier, Thatcham Research has produced a fully searchable, online fitment guide that provides the AEB system name and availability www.thatcham.org/aeb-fitment

The UK’s Most Popular Cars Ranked by AEB Safety

Vehicles are ranked according to the percentage of trim levels within that model range having AEB as standard, followed by optional availability rates.

As well as its world leading crash and track research, Thatcham Research tests and accredits crash repair parts, vehicle repair technicians, and a number of other products and services within the collision repair industry for insurers, motor manufacturers, equipment manufacturers and suppliers.

A founder member of the international Research Council for Automobile Repairs (RCAR), Thatcham has also been a member of the European New Car Assessment Programme (Euro NCAP) since 2004. 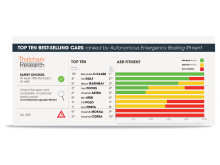 The best-selling cars of ...