At Emma’s 20 week scan we found out that Aston had a tumour growing at the base of his tailbone. We were told it was a condition called a sacrococcygeal teratoma that affects about one in every 40,000 children. We were warned that the tumour could grow quite big and as a result for the remainder of her pregnancy, Emma would need to be closely monitored at Leeds General Infirmary (LGI) in case of complications that might arise.

Aston arrived three weeks early by planned caesarean on 27 December 2017. In the weeks leading up to his birth we were anxious. We’d been told what to expect but we nothing could have prepared us for the moment we saw our baby for the first time with our own eyes. The tumour weighed over two kilos and was almost as big as Aston himself, made up of cysts and water. It was terrifying. He was rushed away to the neonatal intensive care unit (NICU) after being delivered at 12.45pm and Emma didn’t even get to see him again until later that evening.

The week that followed drained both me and Emma. Aston was being prepared for a very long and complicated operation, which he might not survive. To be honest, it was a miracle he had lived through the pregnancy because the tumour was so large.

For five days, Emma remained in the maternity suite and for five nights I slept in a chair beside her bed, which was very uncomfortable and exhausting. It was there that the nurse mentioned Eckersley House, which is run by The Sick Children’s Trust – my mind was so overwhelmed by thoughts of Aston that I hadn’t considered we might be able to stay there.

I had been supported by the charity back in 2011 when my late son underwent open heart surgery. The charity had been a lifeline for my family then, but to be told Eckersley House had another room for Emma and I to stay in whilst Aston was in hospital was my salvation. There is nothing more traumatic than being back in the same hospital where you lost a child – the memories all came flooding back. Eckersley House offered me some respite – a safe haven where I could collect my thoughts and overcome my demons and get my strength back for Emma and Aston.

At just a week old Aston went into surgery. I waited for that phone call to tell me that something terrible had happened again. Emma and I tried to keep busy by walking around Leeds city centre and visiting museums. We spoke to LGI every few hours, but until we knew the operation had been a success and Aston was OK, we were on tenterhooks. 11 ½ hours after he had gone into theatre the call came. They had managed to remove the tumour and Aston was alive.

It was such a relief to fall into bed at Eckersley House that night knowing that Aston was safe and being looked after on NICU. There was a phone line in our room direct to the ward where he was sleeping, which gave us so much comfort because if anything changed during the night, we would know immediately and could be there in a couple of minutes.

Over the days that followed, Eckersley House was where we would retreat to for a time out. Not having to travel to and from Huddersfield every day to be by our son’s hospital bedside meant we weren’t so exhausted nor were we breaking the bank with petrol costs. We could be right there with Aston through every step of his recovery. At Eckersley House there were facilities which meant we could wash his baby clothes and Emma and I could spend a little time alone recuperating. There was also a large kitchen and sitting room for families to use and every night we were comforted to know that we would be sleeping in a warm room with soft beds and get a sound night of sleep, ready for the following day back on the ward. The house has such a homely feel to it that it’s possible to forget that you are right next to a hospital.

Eckersley House made our lives so much easier – you can’t underestimate how having somewhere to retire away from the hospital means. LGI holds so many horrific memories for me so just being in the house surrounded by such helpful, polite and kind people made a real difference. Emma was an amazing support to me – she remained strong and brave, taking care of both Aston and I. Without Emma or her father I couldn’t have coped.

It is very obvious that the staff at Eckersley House work hard throughout the day to make the families staying there as comfortable as possible. The house has an environment in which everyone helps each other – the circumstances may be different, but we all have seriously ill children and are all looking for a way out of the emotional and mental turmoil.

Being so close to our baby also meant we could be hands on and involved from the start in his treatment plan. We were able to learn how to perform clean intermittent catherisation on Aston, which he still needs three times a day. We also learnt how to keep his stitches clean and how to prevent infection. Being able to stay so close to the hospital enabled us to gain the confidence we needed to care for our baby boy. And we truly believe that by being there, so close to Aston at all times, we were able to take him home for the first time sooner.

At 16 days old Aston was discharged and since getting him home he has gone from strength to strength. It is fantastic to have a baby in the family again and although he may need an operation in the future, the outreach team are really pleased with his progress. He is now two months old and such a good baby. We are able to deliver the treatment he needs at home and I am finally feeling positive about what the future holds for Emma, Aston and I. 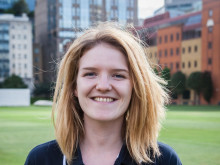