Virgin Trains’ First Class customers are in for a treat when they board their train home this evening. Liverpool’s finest culinary export, Scouse will be served piping hot on 31 services, exporting the local delicacy along the West Coast Main Line at 125mph to the West Midlands, Manchester and Scotland. What better way to replenish the tank after a hard day’s graft?

Tonight’s offering is just one of a number of initiatives planned as Virgin Trains gets right behind this year’s Global Scouse Day which takes place on Sunday 28 February.

A Liverpool Gin cocktail reception will take place on Friday evening at Lime Street station. And fans travelling to the Capital One Cup Final on Sunday will be able to purchase some Scouse Pies from Homebaked, the Co-operative Bakery and Community Land Trust located just a few steps from Liverpool Football Club, who are setting up shop at the station.

“Scouse went down a storm in 2015 when we served it on our Liverpool trains,” explained Virgin Trains Onboard Manager and Scouser, Gary Campbell. “So we thought we would go one better this year and serve it network wide as part of our commitment to bring regional and innovative food to all of our customers.”

“It should be a fun few days in the lead up to Sunday and we are hoping, as we've been led to believe, that the Scouse Pies are a lucky omen and will ensure the result we are all hoping for at Wembley this weekend.”

Lord Mayor of Liverpool, Councillor Tony Concepcion popped down for a quick taster and is pictured here with some of the onboard team.

Virgin Trains is the brand name of Virgin Rail Group (VRG), which is owned by Virgin Group (51%) and Stagecoach (49%). Virgin Trains has operated the West Coast passenger train franchise since 1997, serving key UK cities including London, Birmingham, Manchester, Liverpool and Glasgow. In June 2014 the Department for Transport (DfT) awarded VRG a new franchise until at least April 2017.

Since 1997, Virgin Trains has introduced over 70 new trains at a cost of £1.5 billion. The service carries more than 34.5 million passengers a year and Virgin Trains employs approximately 3,290 staff.

Visit the Virgin Trains East Coast Media Centre at: http://www.virgintrainseastcoast.com/media-centre for the latest news and images. 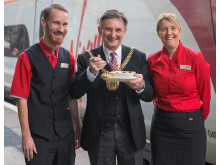 Lord Mayor of Liverpool, Councillor Tony Concepcion tucks into some Scouse alongside two of the Virgin Trains onboard team