Fish and (micro) chips: How technology is transforming the salmon supply chain

“Is the salmon fresh?” It’s a question every waiter has heard as a diner ponders the menu. But where once they might have nodded courteously, tomorrow, and with the help of emerging technologies, that same waiter will know not only if the salmon is fresh, but also where it came from, as well as the route and time it took to reach the restaurant. How? Step forward the Internet of Things (IoT) and blockchain.

For starters…
If we know that IoT is a network of devices embedded in ‘things’ (such as vehicles or home appliances), how does that translate to the humble salmon? Surely, a device isn’t attached to a fish.

While each individual fish isn’t tagged with a device, their environment is. This might appear unnecessary until you consider that in 2016, El Nino caused unusually high sea temperatures in Chile, leading to an explosion of algae growth, killing 23 million salmon. Enough to fill 14 Olympic-sized swimming pools, the economic impact was huge, costing the country an estimated US$800m.

This lesson has been well-learned in Norway. In 2014, researchers in Romsdalsfjordand Nord-Trøndelag county mapped ocean currents and temperatures using IoT in an attempt to prevent the spread of disease within and across salmon farms. Using predictive analytics, the researchers were able to model how disease is carried along the coast from one salmon farm to another.

This lead the Norwegian authorities to divide the country’s coast into production zones for farmed salmon and large, designated areas without fish farms. These act as firewalls to prevent the spread of disease across salmon farms. 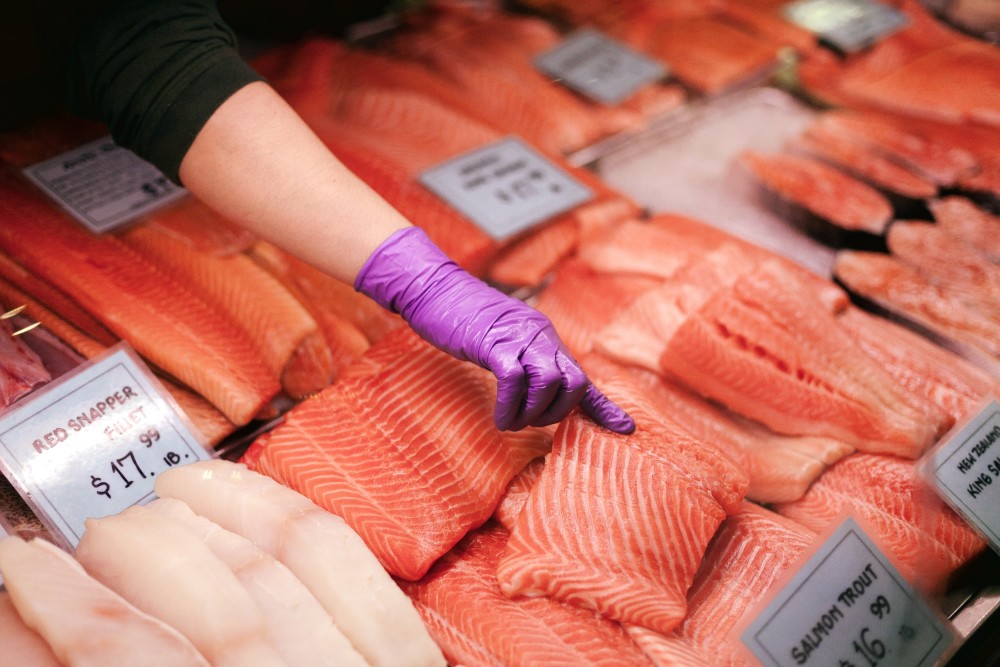 Photo by Colin Czerwinski on Unsplash

But IoT does not stop at source. As soon as the fish enter the supply chain proper, IoT can also be embedded in containers carrying live fish and ping a range of information back to selected devices in real time. This ensures that the live fish remain in pristine condition, and at a constant temperature, throughout transit.

The main course
Consumers are becoming ever more demanding of traceability and transparency. The discerning foodie wants to know if the salmon on their plate was, indeed, wild and Norwegian. Once, it would have to be taken on trust. But blockchain is changing that.

Excel is how high street banks work. When you make a purchase and put your debit card into a payment terminal, it connects to the bank. The bank – a single entity – checks you have the money to pay for your meal, confirms this, then makes the digital transfer to the place of purchase.

With blockchain, that digital ledger is open to anyone to see. This ability to have multiple people view a ledger offers a robustness not seen in the traditional method. There is no single point of failure, nor is it able to be controlled by a single entity. Transparency and accuracy are guaranteed.

In practical use, at the salmon farm, producers are able to add a QR code to a single shipment, embedding information about themselves and the time and date the fish were harvested. This information can then also be fed into the blockchain, which will be updated at every step of the cargo’s journey.

This gives the consumer complete transparency; they can trace a fish’s journey from ocean to plate. 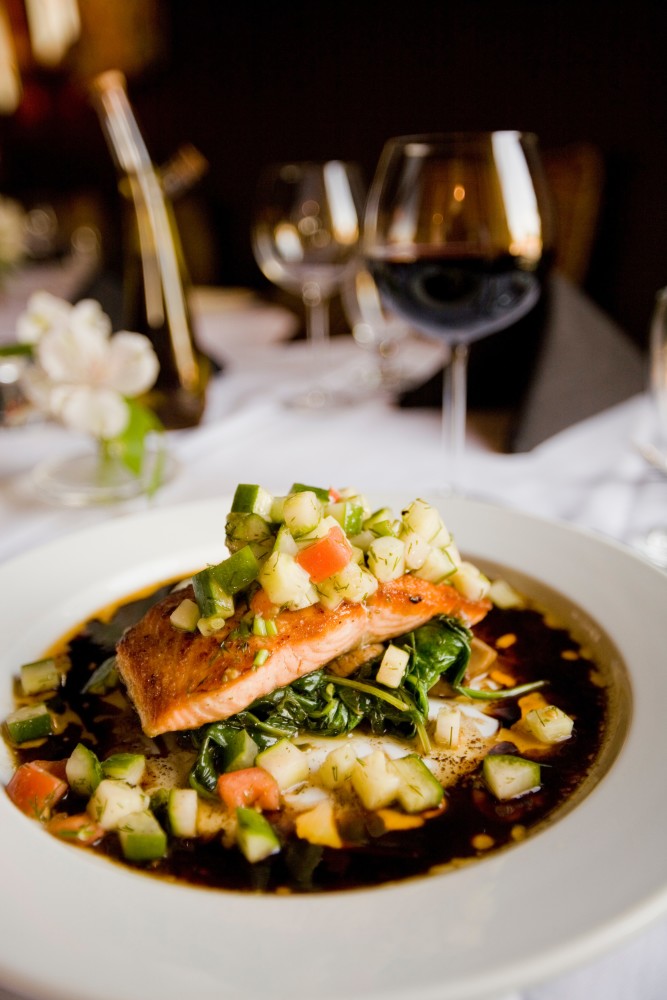 Photo by Casey Lee on Unsplash

This is ever-more important to consumers, not only to gauge freshness but also to ensure that producers reflect the values of the consumer. And with this complete transparency comes loyalty.

Research carried out by Label Insight, an organization established to help consumers understand what is in the products they use and consume, suggested that with complete transparency comes consumer loyalty of 94 percent. Similarly, a study by Response Media said that 99 percent of respondents would be willing to pay more for fresh food if its origins were completely transparent. Further, 37 percent said they would switch brands if another brand shared more detailed product information. If demand drives the market, this is a compelling argument and an indication of the way we are heading.

But the benefits of blockchain don’t end there. As well as increased consumer loyalty (and their willingness to pay more), blockchain also has the capability of increasing efficiencies by reducing food waste. Not only can it avoid disease within salmon farms, but it can also guarantee that the produce was transported in optimal conditions and at the perfect temperature.

Catch of the day
It seems with blockchain, IoT and predictive analytics we have emerging – and merging – technologies that are benefitting everyone. The producer can ensure as good a harvest as possible, the consumer gets the transparency they crave, and the waiter, well, when asked about the freshness of the salmon, they can respond: “Yes, the salmon was caught this morning. In Norway. By a man named Sven. It was kept at a constant, ideal temperature during transport. Would you like to see the blockchain along with the wine menu?”

Panalpina has launched the Panalpina Digital Hub to embrace new technologies including the Internet of Things (IoT), artificial intelligence (AI) and blockchain that have the potential to disrupt the business in the coming years. The new business unit is to explore innovative technologies, develop new digital solutions for customers, and engage with digital start-up companies.

Panalpina has joined the Blockchain in Transport Alliance (BiTA), a forum of leading tech and transportation companies for the development and implementation of blockchain standards in the freight industry. The company sees many advantages of blockchain technology for freight forwarding and logistics operations in general, but also for specific areas such as perishables in particular.

Delivering 64 tons of cheese to Bahrain

How Panalpina ships frozen cheddar cheese to Bahrain, voted the best country in the world for expats in 2017

The Digital Hub is tasked with exploring disruptive technologies and developing new digital solutions for customers as well as realizing business opportunities for Panalpina. In an interview with innoFRAtor, a platform by Fraport, Air Cargo News and German publication DVZ, Panalpina’s Luca Graf explains the reasons for setting up the new business unit and how it can add value for customers.

IoT and supply chain: products will plan their own journey

Imagine a world in which products plan their own journeys around the globe. Panalpina and Bosch are working on the solution. In his keynote presentation during this year’s Bosch Connected World, Panalpina CEO Stefan Karlen, provided a public demonstration of how the latest IoT technologies in use and those being developed will shape tomorrow’s supply chains – IoT connected supply chains.

This year’s top Internet of Things (IoT) event is around the corner. Bosch Connected World will take place February 21-22 at STATION-Berlin. The purpose of the conference is to provide the inspiration, education, and connections needed to thrive in IoT. In the spirit of interconnectedness, we are sharing five stories that look at the present and future of IoT so that you can warm up to the event .

Blockchain: Moving from hype to tangible benefits for supply chains

The initial glitter of blockchain may have taken a beating, but concrete steps are underway to turn its promise into tangible business applications. A keen mover of digital technologies in freight forwarding and logistics, Panalpina has narrowed the use cases for this industry and started a pilot to play the benefits of blockchain to make supply chains more efficient.