How often do you change phones? When you do, do you stop to consider what is behind that piece of equipment that has become so essential to our lives? There is a whole "take, make and dispose” industrial model involved in making a smartphone, and it is extractive and non-sustainable. But looking beyond that there is a concept aimed to redefine products and services to eliminate waste – the circular economy.

The lifespan of a smartphone is defined by many factors, including how you recharge your phone. Software and hardware depend on each other and they all have different life cycles.

Software keeps being updated and it is designed to take advantage of ever-increasing internet speeds and the latest hardware capacity, so even if you have a mint condition phone from 2014 it may not be able to cope with today’s processing needs.

Hardware itself is becoming more capable and efficient; availability of resources and open source movements akin to what the software industry has witnessed are increasing manufacturing pace.

All this means that our phones consume more energy. Yet powering it all is the familiar lithium-ion battery with a lifespan of 300-500 charging cycles (your phone goes through a charging cycle every time you plug it when it’s below 70%). Technically, your battery is only designed to work properly for about a year to a year and a half. After that you can expect diminishing charge periods, heating, and glitches. 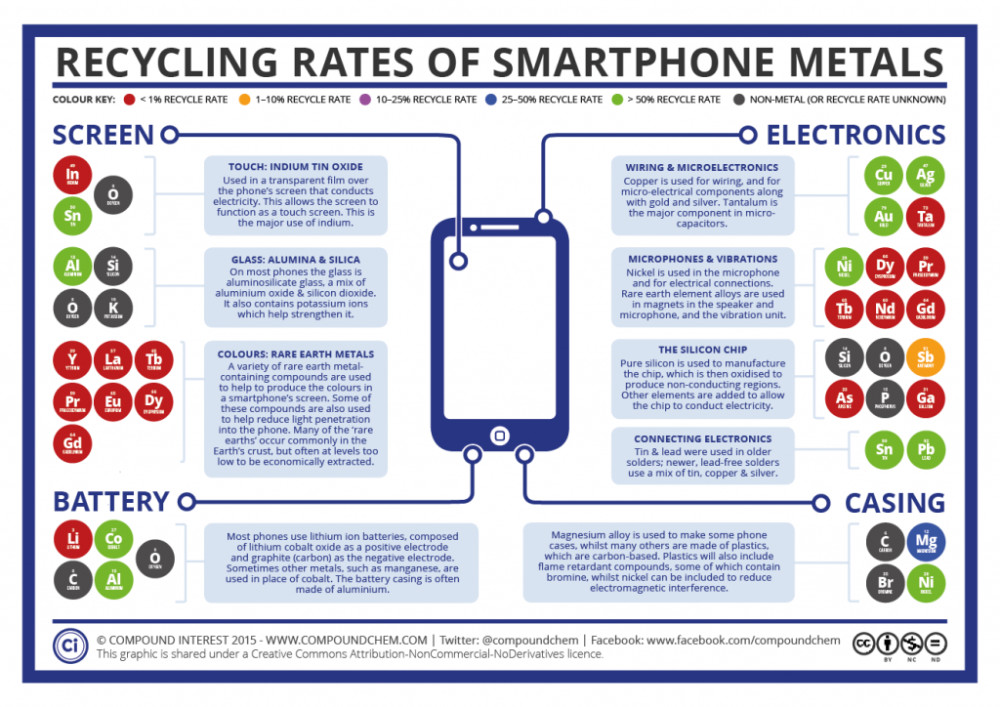 Making an average smartphone requires over 60 chemical elements, and that is taking a large portion of Earth’s natural resources. The most sought-after among them are known as rare earths, a group of 17 elements coveted for their magnetic and conductive properties. Thanks to them our phones are lighter, faster, stronger, and more efficient. Some estimates say that Chinese mines will run out of rare earths within the next twenty years.

However, while we certainly need to be conscious of the environment, it is not all gloom and doom, but also a matter of perspective. Rare earths were believed to be scarce when they were discovered in 1787, hence the “rare”, but they seem to be rather well-distributed in the Earth's crust.

In fact they make up about one-fifth of naturally occurring elements, and are at least twice as abundant as copper. Besides, we don't consume them nearly as quickly because rare earths are to technology what baking soda is to chocolate chip cookies: a little goes a long way.

The main problem with these elements lies in that some production sites are engulfed in geopolitical and social issues. Extraction in such contexts can be problematic, especially for local populations.

So where do you fit in?

Here at Panalpina we are also playing our part to support the circular economy, for example at our site in Dubai where we run diagnostics and repair operations for smartphones, tablets, laptops and games consoles. In addition, many locations have e-recycling programs in place to comply with our green IT policy.

We all need to work together to make the circular economy a reality.

A taste for less waste

The purchase of a product often marks the end of a supply chain. But increasingly consumers are questioning the traditional linear process of “take, make, dispose”, demanding that manufacturers and retailers ensure that they reduce or eliminate waste. In the circular economy, logistics companies play an important role in extending the life of products through reuse, remanufacturing and recycling.

World Remanufacturing Day: celebrating the commercial and environmental benefits of the circular economy

If rockets can be reused, then a lot of other things should be too! Today is World Remanufacturing Day. Remanufacturing and the circular economy go hand in hand and Panalpina helps its customers make the transition to circular supply chains in multiple industries; remanufacturing mobile phones, repairing telecoms equipment, repacking fashion products and screening and testing optical equipment.

Panalpina at the G7 value retention workshop in Montreal

Under the scope of Canada’s G7 Presidency in 2018, and following the group leaders’ summit in Charlevoix earlier this month, Panalpina was invited to participate with a supply chain perspective in the G7 value retention policies workshop on advancing remanufacturing, refurbishment, repair and direct reuse. The event was held at the Panoramic Hall of the Montreal Science Centre on 21-22 June.