The Electric & Hybrid Marine Awards are now in their sixth year. The prizes rank among the world’s most prestigious honours in the marine industry and are awarded to recognise the achievements of manufacturers, suppliers, engineers, innovators and their products in the marine sector. Nominations are submitted anonymously from players in the marine industry across the globe. The judging panel consists of leading marine journalists, industry experts and academics. Once again they have chosen to recognise ForSea – the world’s first battery-powered passenger and vehicle ferries.

Hybrid Propulsion System of the Year

Other nominations in the same category were:

The awards were made on 27 June during the Electric & Hybrid Marine World Expo 2019 in Amsterdam.

The Helsingør-Helsingborg ferry service is the region’s floating bridge and consists of five ferries: Aurora, Tycho Brahe, Hamlet, Mercandia IV and Mercandia VIII, all of which are environmentally friendly and equipped with catalytic converters. Aurora and Tycho Brahe have both also been converted to battery-powered operation for a total investment cost of approximately SEK 300 million. INEA, an executive agency for innovation and networks within the EU, has allocated approximately SEK 120 million to support the investment. In 2018 ForSea carried 7 million passengers and 1.3 million cars, 452,000 trucks and 16,600 buses and coaches – 20% of the total number of vehicles crossing Öresund. This traffic promotes integration and growth in the Öresund Region and is managed by a staff of 750 dedicated professionals, working every day to ensure that users have access to safe, efficient connections between Sweden and Denmark that make every journey as convenient and comfortable as possible. The connection also helps to create a further 2,000 job opportunities in the region. Johan Röstin is CEO of ForSea AB, which is owned by investment specialist First State Investments.

Sustainable all the way

The transition to battery power is reducing ForSea’s emissions and attracting a lot of attention. At the same time, sustainability work is now being done throughout the entire company and directed at everything from energy-savings and waste-management to certified raw ingredients and social responsibility.

For just over a year ForSea has been operating the world’s first battery-powered vessels to serve a high-intensity ferry route. The company’s environmental goals have always been ambitious and continue to be so. Now the time has come to achieve the next target – to ensure that all the fish and seafood served on board is MSC- and ASC-labelled. 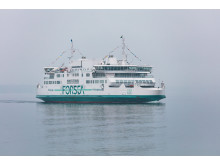