“Web of Science,” which gathers scientific publications, establishes that Stephan Barthel, founder of Urban Studio at the University of Gävle, has been one of the most frequently cited researchers in the last decade.

Stephan Barthel’s articles on sustainable urban development focus particularly on the role of green spaces and people’s relationships to urban green spaces. He points out that his driving force is to show that the presence of nature in cities plays an important role for people’s well-being and also in building a buffer capacity against climate change and other types of

problems. Such efforts become especially urgent as the current rapid urbanization is so hard to prevent.

“As a young man, I lived on the south side of Stockholm and I discovered that I was continuously drawn to the green spaces where I found inspiration and gained strength. I decided to devote my life to this.”

A smaller higher education institution can risk being daring

After being awarded his PhD from Stockholm Resilience Centre, studying under Carl Folke and Johan Rockström, Stephan Barthel built the splendid research environment Urban Studio at the University of Gävle.

Urban Studio results are now frequently cited in media, and Barthel underlines the advantages of working at a young higher education institution which to a large extent focuses its effort on environmental issues.

“I guess that I, together with my colleagues, have opened up new frontier research areas. If you are one of the first to come up with new ideas, and they take off, it becomes frontier research.”

At the University of Gävle, there is a great potential for development, as it dares to open up new frontier research areas.

While Stephan Barthel will continue to produce scientific articles, his current focus will be on collaborating with Region Gävleborg, the municipalities in the area and private actors.

“We have an ongoing collaboration project with the Region on creating sustainable cities and communities for the future. Here, we listen to one another, and there is also a lot of practical knowledge that we lack; we all have to give and take.

“This gives you an indication of the importance this institution places on this field. I believe it is an advantage both for Gävle as a city and as a region to be on the smaller side, because it means that changing for the better is easier. We can be flexible in another way,” Stephan Barthel concludes.

In academia, Web of science is often counted as the foremost quality-driven database for peer-reviewed journals, and it is seen as an important tool for the analysis of international research communication, the citation index of indexed journals.

The Swedish Research Council uses Web of Science on its government mission to calculate the bibliometrics index of each Swedish higher education institution, which is later used in allocating competitive parts of the state funding for research and researcher training. 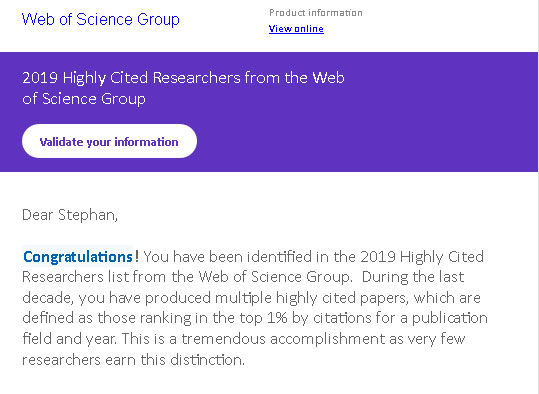