-A world first, artificial creation of cell nuclei structures has been achieved by using microinjection of DNA-conjugated beads (with a diameter of about 3µm) into the cytoplasm of living fertilized mouse eggs

-The artificially created cell nuclei were confirmed as being the same as those created naturally by the fertilized eggs, with the formation of DNA nucleosomes*1 with surrounding nuclear membranes

-The presence of DNA is shown to be the starting factor of the formation of cell nuclei inside of fertilized eggs, this knowledge is expected to contribute to the discovery of causes of infertility in the future

In eukaryotes, cell nuclei are known as dynamic organelles which are repeatedly disintegrated and reconstructed as cell division occurs, transmitting, utilizing and storing DNA (the controlling factor of lifeforms). However, until now there were only a limited number of studies that analyzed the factors behind how this elaborate structure is able to systematically reform, or on how it acquires its functionality. Therefore this study used fertilized eggs as a model, attempting to observe the process of artificially creating cell nuclei by adding already known necessary materials to a live fertilized mouse egg. Specifically, the study focused on the DNA, the building blocks of life. The effect of combining DNA with microscopically-small beads, and inserting this into the cell nucleus was observed. The result was the accumulation of histones*2 around the DNA-conjugated beads, forming nucleosome structure, and the reconstruction of artificial cell nuclei with nuclear membranes and nuclear pore complexes.

However, the artificial cell nuclei were not able to transport (nucleus migration*3) proteins from the cytoplasm to the cell nucleus. The surroundings also lacked the presence of the protein importing/exporting Ran factors*4. This suggests that the structure of the nuclear pore complex*5 may be incomplete, or that proteins involved in the transport may not function due to other causes.

In this study, we considered the fertilized mouse eggs to be “living test tubes”, and, for the first time in the world, successfully constructed artificially-created cell nuclei structures. Through this, part of the mechanism of the formation of cell nuclei inside of fertilized eggs has been unveiled. This will pave the way for elucidating causes of infertility issues, when the problem lies just after fertilization.

In eukaryotes, cell nuclei are constructed by cell membranes enveloping chromosomes. Further, to make genes work and accurately transmit their information, cell nuclei depend on the cell cycle to repeatedly systematically disintegrate and reconstruct, but in mitosis, the mechanism behind the way in which nuclei are reconstructed is scarcely understood. Up until now, in most cell nuclei formation research, an extract of frog oocyte*6 has been used, using pulverized cell extracts, or hardened and dyed cells to conduct analysis, resulting in data collected being from a particular point of time.

In order to solve this issue, Dr. Haraguchi of the National Institute of Information and Communications Technology, together with Prof. Hiraoka of Osaka University, studied the reconstruction of cell nuclei with the insertion of 3μm DNA-conjugated beads into live mammal cell cultures*7 (Kobayashi et al, 2015). However, nucleosome formation and construction of nucleus failed to occur in the cell cultures. In response to this, Dr. Yamagata of Kindai University and his fellow researchers inserted the DNA-conjugated beads into the cytoplasm of fertilized mouse eggs. Using immunofluorescence*8, live cell imaging*9 techniques, and an electron microscope to observe the whole living fertilized egg, functional artificial cell nuclei were seen over a period of time to be reconstructed inside the cell (using time axis and spatial axis analysis).

Genomic DNA was stored in higher order structure inside of the cell nuclei. The extent to which the DNA on the DNA-conjugated beads was constructed in higher order was evaluated. First, to investigate the envelopment of the DNA by histones, immunostaining and live cell imaging techniques were used, confirming the accumulation of the histones around the DNA-conjugated beads; the accumulation of 4 types of core histones were observed. Next, after the accumulated core histones were confirmed as taking on a nucleosome form, it was clear that RCC1 factor, a factor that binds specifically to nucleosomes, was localizing on the DNA-conjugated beads. Previously, in the study by Haraguchi et el. performed in cell cultures, this was not observed; this is believed to be a result of the specialized nuclei constructing abilities of the egg cell. 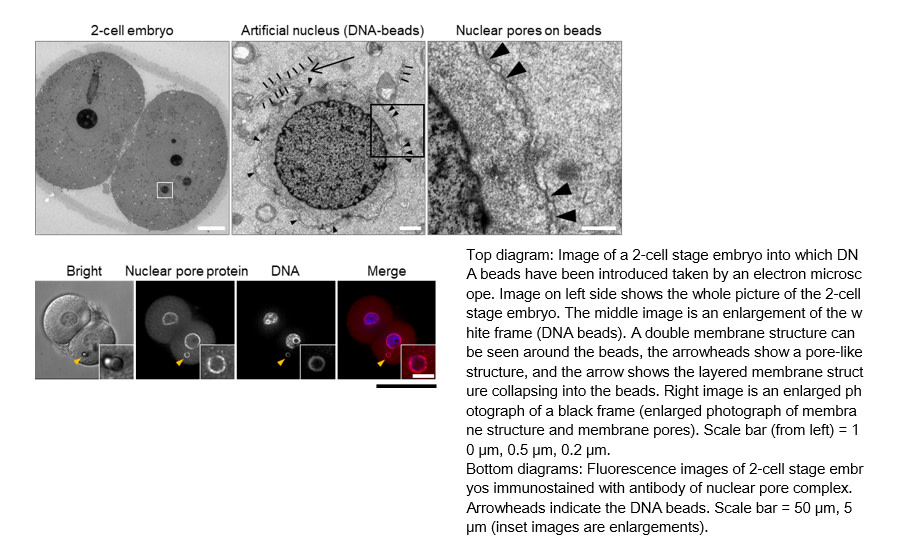 (4) Assessment of the transport ability of the artificial nuclei structures

Formation of functional nuclear membrane pore complexes around the DNA-conjugated beads was studied. First, the functionality of the nuclear pore complexes of the molecular barrier*10 was confirmed. Varying molecular sizes of fluorescent dextran*11 were used to test the transmissibility through the membrane pores. It was found that, as no fluorescent signal could be seen in the DNA region for the large molecules, the artificial nuclei structures had formed molecular barriers which prevented the passing of larger molecules. Next, to confirm the nuclear transmissibility, the import of nuclear localization sequence (NLS)*12 with added fluorescent proteins into the artificial nuclei structures was observed. No signal surrounding the DNA-conjugated beads was observed. In addition, using immunostaining, Ran (known to be a factor involved in nucleus migration) was not found surrounding the DNA-conjugated beads.

It is clear that as long as DNA exists in the cytoplasm, artificial nuclei structures can be created using fertilized mouse eggs. However, it was found that in order to function as a cell nucleus, a factor other than DNA is necessary. As this study enables analysis on a time-series basis, investigation into cell formation mechanisms, and how cell nuclei are reconstructed and take on functionality becomes possible. In the future, if the functional artificial cell nucleus will nuclear transport activity can be constructed by combining other factors with DNA, the mechanisms behind cell nuclei formation and functionality acquisition can be further understood.

2. Histone: A key protein found inside the cell nucleus. An indicator in tests when combined with DNA.

3. Nuclear transport: Transport of proteins from the cytoplasm to the cell nucleus

5. Nuclear pore complex: Large protein complex that intermediates the transportation of macromolecules between the cell nucleus and cytoplasm.

7. Cell culture: Cells grown artificially outside of a living organism.

8. Immunofluorescence: Technique to use antibodies with dyes to examine the existence of certain proteins inside of a cell.

10. Molecular barrier function: A function in which small sized molecular structures can pass through the nuclear membrane, but large ones are not able.

11. Fluorescent Dextran: Flourescent substance used to examine the presence of the molecule barrier function. There are both large and small molecular variants.

12. Nuclear localization sequence (NLS): An amino acid sequence essential in the transportation of proteins from the cytoplasm to cell nucleus.

[For inquiries regarding this study]