The Swedish local government debt office, Kommuninvest i Sverige AB, increased its lending volumes by 9 (7) percent during the first six months, according to its interim report. This was an effect both of increased municipal borrowing and Kommuninvest advancing its share of the sector's loan debt. Operating profit was SEK 359.4 (391.3) million.

The Swedish local government sector’s investment and borrowing needs continue to increase, due to strong population growth, urbanisation and demographic changes with an increasing share of elderly and young people. Kommuninvest estimates that total outstanding local government borrowing increased to SEK 679 (644) billion during the period, corresponding to 13.9 (13.4) percent of GDP.

Kommuninvest’s lending (recognised value) increased to SEK 388,448.6 (355,710.0) million. Kommuninvest is the largest lender to Swedish municipalities and regions, with an estimated market share of 57 (55) percent of the local government sector’s total borrowing. The volume of committed Green Loans grew to SEK 52,334.8 (39,503.3) million, with reference to 284 (232) investment projects and 124 (109) municipalities and regions.

Operating profit amounted to SEK 359.4 million (391.3), where the decrease is mainly explained by lower interest rate margins in accordance with the established pricing strategy.

On June 7, 2019, the EU published its final legislative package in which the leverage ratio requirement has been set at 3 percent of gross exposures. The new rules will enter into force as of June 28, 2021. Calculated in accordance with the Capital Requirements Regulation CRR, Kommuninvest's leverage ratio was 1.55 (1.75) percent. Calculated according to the regulation's special conditions for so-called Public Development Credit Institutions (PDCI), where all lending to Kommuninvest members and their companies can be excluded from the exposure amount, the leverage ratio was 8.55 (11.30) percent.

Kommuninvest Cooperative Society had a total of 289 (288) members at the end of the year, of which 277 (277) municipalities and 12 (11) county councils/regions. During the period, Region Blekinge became a new member.

- Low interest rates contribute to the fact that financing costs today constitute a small part of the municipal sector's expenditure. Rather, the challenge is about the competence supply and its impact on costs. Municipal debt is still low and stable in relation to GDP.

The complete interim report is available for download as an attachment to this release.

This release contains such information that Kommuninvest is required to disclose pursuant to the Swedish Securities Markets Ac and/or the Swedish Financial Instruments Trading Act. The information was submitted for disclosure on 27 August 2018 at 16:00 hrs.

Kommuninvest is a municipal cooperation for efficient and sustainable financing of housing, infrastructure, schools, hospitals etc. Together, we get better loan terms than each one individually. Since its inception in 1986, the Kommuninvest collaboration has helped lower the local government sector’s borrowing costs by many billion kronor. Currently, 289 municipalities and counties/regions are members of this voluntary cooperation. With total assets exceeding SEK 450 billion (USD ~47 billion), Kommuninvest is the largest lender to the local government sector and one of the ten largest credit institutions in Sweden. The head office is located in Örebro.

Prior to publication, it must be approved by Kommuninvest . 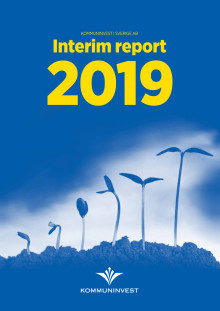