No Yes
During late autumn 2017, NGI will issue a report to the NEA establishing the whereabouts of fluorinated pollutants in Tyrifjorden.

Toxins in Tyrifjorden - where do they come from?

In 2014 and 2015 the Norwegian Environment Agency (NEA) found that PFOS levels in fish from lake Tyrifjorden were respectively 20 and 45 times higher on average than in fish from the lakes Mjøsa and Randsfjorden. The NEA has therefore initiated a project to detect the emission sources.

NGI was tasked with tracking down the source of the contaminants. Its goal is to clarify if there are emission sources along the tributaries feeding into Tyrifjorden, and whether there are differences in the pollution levels in different parts of the lake. NGI's environmental team initiated measurements and sample taking in the beginning of April 2017.

"We have already set out the passive samplers in the four largest rivers that flows into Tyrifjorden", says NGI project manager Åse Høisæter, who is a senior adviser in NGI's Environmental engineering division.

NGI is also in the process of sampling direct emissions from wastewater treatment plants and industrial activities around Tyrifjorden. Furthermore, samples will be taken of sediments, sludge and soil, and also of fish. Shortly, passive samplers will also be placed in several locations in the lake itself. 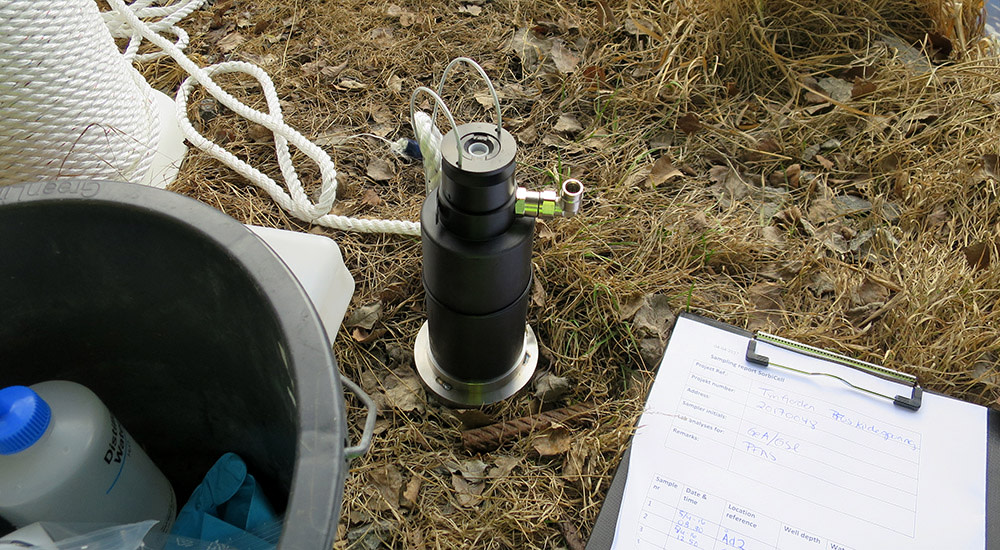 Passive samplers of this type, marked with NGI logo and project number, are set out in several places in Tyrifjorden and its feed rivers, and are intended to help track the origin of contaminants. It is important that these passive samplers remain undisturbed.

"We urge that fishermen and passers-by refrain from disturbing these, as this would severly interfere with the accuracy of the measurements taken", says Åse Høisæter. The samplers, (also called artificial fish), are marked with NGI, Sorbisense and a project number.

"We are concerned that fish in Tyrifjorden have significantly higher concentrations of PFOS than fish in other nearby lakes. However, there is no indication that PFOS levels in fish or in the water of Tyrifjorden pose a human health risk", says Marit Kjeldby, Director of the Chemicals and Waste Department in the NEA.

The FSA has declared that it safe to eat fish from Tyrifjorden. In their analyses, NGI will look at a greater range of fluorinated pollutants defined as PFASs.

"Various fluoride compounds have been in use for various industrial purposes and in fire extinguishing", explains Åse Høisæter, who emphasizes that there can be multiple sources of pollution.

"Both point emissions and more diffuse pollution sources can be present. For example, pollutants may have entered the lake via ground water or surface runoff. Leachate from landfills is also a possible source, and it is possible that we may find a combination of differing Sources", says Åse Høisæter.

She adds that the issues with the PFASs do not limit themselves to Tyrifjorden: "We see that the waste water generally contains more of these toxins. They can stem from industry, but they can also come from everyday household activity, such as washing goretex garments and teflon frying pans".

Much research on PFASs

In recent years, NGI has carried out several research-based projects that will provide more knowledge about PFASs. Society has become increasingly concerned with the problem of synthetic fluorine compounds. This is due to a combination of several factors:

"PFASs, unlike many other environmental pollutants, do not biodegrade in nature. Also, PFASs are concentrated in the food chain and exist, for example, in perch which feed on animal matter", explains Åse Høisæter.

It was only around 2000 that PFASs were defined as environmental pollutants. Research was therefore late in starting, and there is an urgent need for more knowledge.

Tyrifjorden is one of Norway's most species-rich lakes, with considerable recreational fishing and large populations in adjacent areas. The results of the source-tracking project will be completed by November 2017.