Achieving harmony between human and machine: OMRON at the Hannover Messe 2017

OMRON is one of the leading companies in the field of industrial automation and once again pulled in the crowds at this year's Hannover Messe. The company's stand in hall 9 was a symbol of industrial automation technology, a key aspect of the Hannover Messe, which to this day is the leading international trade fair for manufacturing and process automation, system solutions and industrial IT/digital factory solutions . OMRON showcased a combination of future-oriented solutions and artificial intelligence for these industrial sectors.
Trade fair visitors had the opportunity to discover components, systems and ideas that reflected OMRON's the motto "Integrated, interactive and intelligent automation". 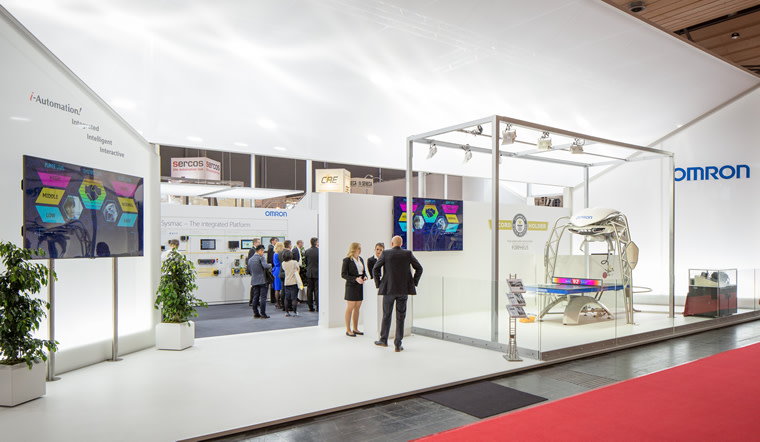 Through its technology, OMRON made it a point to showcase what a harmonious relationship between humans and machines might look like – with one of the major attractions being the table tennis robot FORPHEUS. The robot's name is an acronym for "Future OMRON Robotics technology for Exploring Possibility of Harmonized aUtomation with Sinic theoretics ." In other words, FORPHEUS is a symbol of a new paradigm in the relationship between man and machine, and a representation of OMRON's very own Sinic theory, which predicts the technological developments affecting our future society (for more information, see https://www.omron.com/about/principles/sinic/).

In 2015, FORPHEUS earned a Guinness World Record® for being the "worlds first robot table tennis tutor". On show at the 2017 Hannover Messe was the third generation of this visionary robot - and this incarnation has learned even more than its predecessors. A collection of movement algorithms from table tennis players of varying levels has now been added to FORPHEUS's AI. During a table tennis game, the robot's system uses its cameras to record the ball in three dimensions. By carrying out 80 computing operations per second, FORPHEUS is able to predict the ball's path using extrapolation. This calculation process begins as soon as the paddle touches the ball . 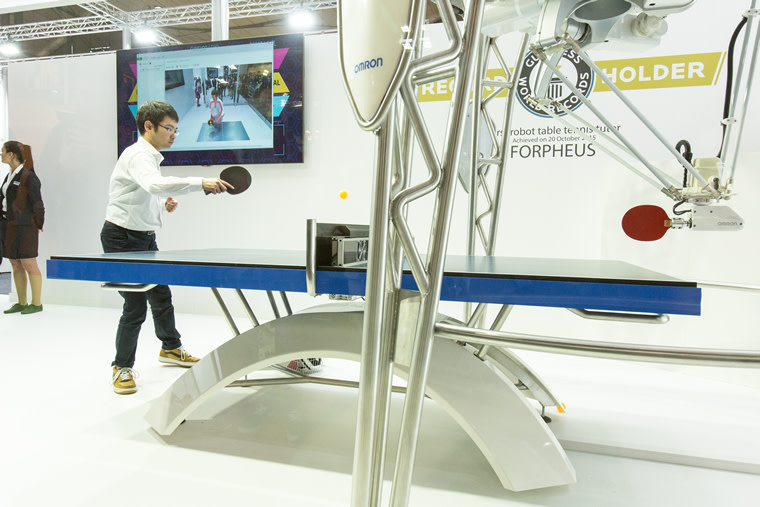 FORPHEUS, who is built entirely with OMRON's technology, now brings together a wide range of technologies and can process information, predict events, learn new things independently and take appropriate actions. What's more, it can also interact and communicate with people. Player analysis and the ability to adjust its playing style allow the robot to act just like an individual player, and it can adapt its abilities to the level of play and therefore act as a trainer for its human counterparts. To do this it uses its AI and algorithms to set challenges during rallies that improve its human opponent's skills and readiness to learn. The robot's ability to positively influence the motivation of human players through generating playing levels that are slightly more challenging than their current abilities is a particular indication of new synergies between humans and machines. All in all, the robot was the ideal demonstrator for the Hannover Messe, delighting and astounding players and the public while at the same time showing that the innovative automation technology of OMRON machines can support and even entertain people.

FORPHEUS is the embodiment of harmonized automation technology and is the perfect example of how humans and machines can benefit from each other. Above and beyond the mutual learning opportunity presented by this didactic aspect, a major benefit is the fact that people can use the technology offered by OMRON to unlock potential and create a better and more progressive future. If the skills demonstrated by FORPHEUS were applied to a production environment, the possibilities would be endless. It clearly shows how, in the future, robots could evolve into valued colleagues, bringing huge benefits for humans by opening up more space for creativity and a greater quality of life. 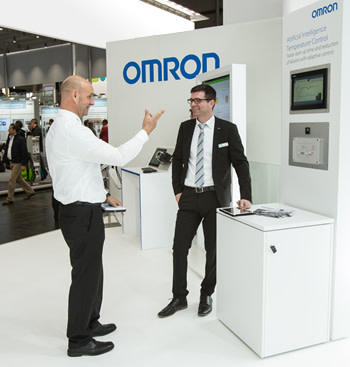 In addition to further demonstrations and new developments, OMRON also unveiled its next-generation temperature regulators, which feature integrated AI that enables them to use an "adaptive control algorithm," reducing the amount of manual intervention required and making system maintenance simpler than ever. Such highly stable temperature regulation will enable production capacities to be stepped up in a wide range of applications, with no reduction in quality. Furthermore, OMRON's AI-equipped machine automation controllers were instrumental in the development of the table tennis robot FORPHEUS.

To OMRON, AI is a natural focus as it allows the company to utilize its strengths, applying & combining them to create new applications. As such, OMRON is planning to successively incorporate AI/IoT technologies into its factory automation (FA) equipment up to 2020 in a bid to offer solutions to the social issues facing many manufacturing businesses, as well as becoming more efficient. OMRON plans to equip sensors and machine automation controllers with optimal AI algorithms in order to complete its plan to make the manufacturing process more intelligent, all in an effort to allow humans to live more comfortable.

OMRON Corporation is a global leader in the field of automation based on its core technology of sensing and control. OMRON's business fields cover a broad spectrum, ranging from industrial automation and electronic components to automotive electronic components, social infrastructure systems, healthcare, and environmental solutions. Established in 1933, OMRON has about 38,000 employees worldwide, working to provide products and services in more than 110 countries. For more information, visit OMRON's website: http://www.omron.com/

Technologies have been advancing rapidly and automation has made our life convenient. Now, the practical application of AI (Artificial Intelligence) and IoT (Internet of Things) have attracted attention, and the world will evolve more conveniently. The "SINIC theory", OMRON's future prediction, predicts the arrival of an ideal society in 2033. Imagine what kind of future lies ahea

[part 3 of 3] Humans and machines can grow together with AI (artificial intelligence) FORPHEUS evolving year by year as the state-of-the-art technology embodying " the future when mankind and machines are reconciled". "Why was it born?" "How will it evolve this year?" The successive development leaders clarify the whole picture. The last part introduces the 3rd generation FORPHEUS de