Munich, February 26, 2016 – European retail business leaders agree that omnichannel digital transformation is critical to their future success, yet research1 by Fujitsu reveals that most retailers lack a clear strategy for reaching this goal. In fact, European retailers are more likely than any other sector (83 percent) to believe they are gambling with their digitalization investments. With nearly three-quarters of retailers admitting to playing digital catch-up, speed of response is critical and they can count on Fujitsu to help seamlessly connect new digital front-end experiences to their back-end systems and infrastructure.

“As online and physical worlds come even closer together, the development of ‘the connected store’ will become a key differentiator for retailers,” says Richard Clarke, Global Retail Director for Strategy & Business Development at Fujitsu. “Retailers are under extreme and constant pressure to head down the ‘Digital Express Aisle.’ Fujitsu research finds that four in five retailers want to move faster toward digital adoption. They agree that failing to digitalize fast enough will lead to sweeping penalties including reduced market responsiveness, higher relative costs impacting pricing and revenues, not to mention problems with customer retention and loyalty.”

This year is widely tipped by industry pundits as the ‘year of digital transformation’ with, for example, IDC predicting that: “By 2018, 80 percent of European business-to-consumer companies will have created immersive, authentic omni-experiences for customers, partners and employees”2. As one CEO told Fujitsu: “A simple homepage or online shop is no longer enough. The buzzword is omnichannel, as the customer decides when, where, how and which distribution channel is used.” Although there is widespread recognition that digital transformation impacts the top line in terms of how retail organizations optimize customer experiences while maximizing efficiency, Fujitsu’s research uncovers huge disconnects in terms of strategic priorities for digital projects. Among the key findings:

Clarke adds: “Customers want the same personalized service in-store that they get online, whether that’s through their smartphone or a store device. However, the lack of clear digital ownership across all channels and conflicting priorities are a barrier to success. Fujitsu´s connected retail strategy focuses on supporting its retail customers on their journey to omnichannel digital transformation and in enabling them to achieve balance, both in order for them to thrive in a digital world as well as to transform their businesses without disruption.”

Business leaders who participated in the research summed this up in their own words, saying: “Our customers demand speed and convenience, so we’ve had to become (digitally) mature” … “There’s a strategy but it should be clearer. We’re moving with the innovations sent our way” …”Certain people would keep everything as it is. The resistance to change is strong, as is generally the case in mature sectors.”

Fujitsu defines transformation as bridging the digital disconnect through the seamless integration of new front-end experiences with processes and information at the core operational level. This process is fundamental to future business, yet many companies – including retailers – fail to appreciate the risks of attempting a poorly-planned implementation. Achieving the right balance is unique for every organization, instead of being a linear process or about doing one thing or another.

What’s more, in order to be truly digital, organizations must be digitally-enabled from end-to-end, by building new digital front-end experiences and seamlessly connecting these to the back-end systems and infrastructure that enable them.

1 Walking the digital tightrope: A study into the digital maturity of organizations across EMEIA was commissioned by Fujitsu and carried out by independent research company, Censuswide, in October 2015. The study covered the UK, Germany, Spain and Sweden and consisted of two parts: 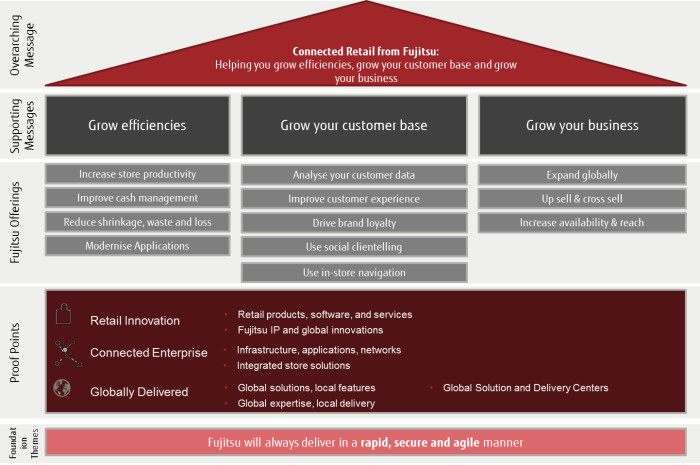 Fujitsu’s international strength and continuous investment in technology innovation allows the company to deliver consistent services to its customers. Fujitsu is committed to using its size, scope and experience as one of the world’s largest IT companies to deliver global capabilities with local responsiveness and know-how. This encompasses:

Fujitsu retail solutions cover the whole value chain – from store, warehouse and headquarter to the backbone in the data center. It transforms the customer experience in stores and across channels, and has the retail solution intellectual property, process knowledge and integration skills to make a difference.