​Stjärnjulskören is coming to Hovet

October is here, and Christmas is right around the corner! Rönninge Show Chorus continues to celebrate and enjoy the acknowledgments for the 3rd international championship victory at the Sweet Adelines in New Orleans in September. The musical focus has quickly changed; It is with great joy that we now prepare for the annual holiday show Stjärnjul, to take place at Hovet, Stockholm Live, december 7 and 8.


FROM AUDITORIUM TO THE FIRST ARENA HOLIDAY SHOW

Rönninge Show Chorus and the Entertainmen, who combined form the mixed choir Stjärnjulskören, has now begun rehearsals in preparation for the 27th edition of their annual Christmas concert series, Stjärnjul.

For many, Stjärnjul has become a tradition: A time to share the warmth and joy of the holiday season and, of course, fantastic music with beloved family and friends. For the last three years, the production has sold out with 10 000 people attending each performance. And this year’s show is destined to be even more magical! For the first time ever, Stjärnjul will be performed at Hovet, the much larger, very prestigious performance venue accustomed to hosting international artists and major productions. Although Stjärnjul has, for 26 years, been a mainstay in Philadelphia Church’s holiday line-up, it’s easy to forget that the production has humble beginnings, having held its first production in a school auditorium outside of the city centre. Over the years, the venue has been changed to accommodate a growing number of Stjärnjul performers and an expanding audience. 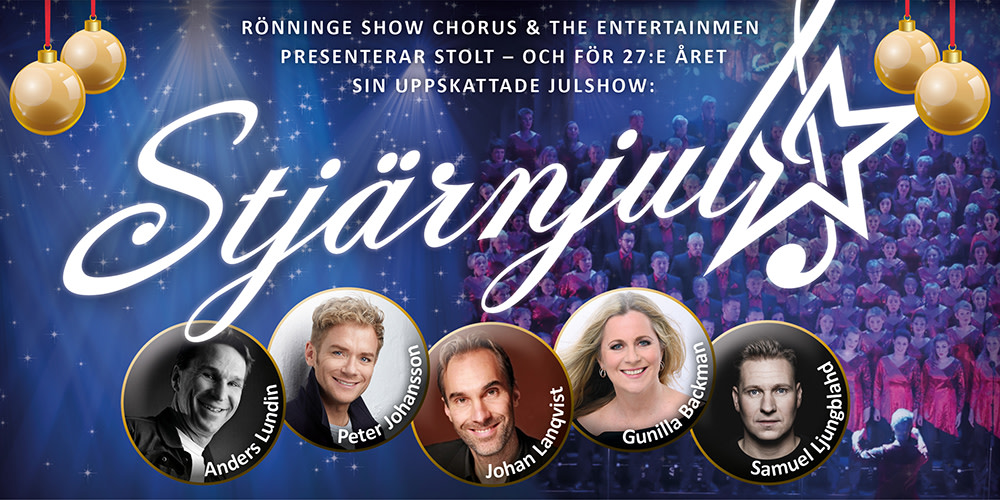 Anders Lundin, a familiar face to most Swedes, will act as Master of Ceremonies. Lundin has hosted a variety of television shows, including the Swedish song contest (Melodifestivalen), whose winner goes on to perform at the Eurovision song contest, Allsång på Skansen and Expedition Robinsson.

Gunilla Backman, one of the country’s most experienced musical artists, has performed leading roles in the Swedish productions of Les Misérables and Jeasus Christ Superstar, as well as supporting roles in major productions like Sunset Boulevard in Germany and Miss Saigon in London’s West End.

Peter Johansson, the versatile musical artist and Queen-interpretor. He is now back with us in Stjärnjul after eleven years where he has created the succéss ”Champions of Rock” and held leading roles in musicals such as ”Footlose”, ”Jersey Boys” and ”Ghost”.

Samuel Ljungblahd has become known as Sweden’s soul and gospel king after performing at Prince Carl Philip and Princess Sofia’s wedding in 2015.

Johan Landqvist, who will premier as conductor of the Stjärnjul Orchestra, is recognizable from his role in 22 seasons of the TV series ‘That’s How It Sounds’ (Så ska det låta). A revered musician, Landqvist has also arranged and conducted performances for the Swedish Royal Family and musicals like Mamma Mia and We Will Rock You. The Stjärnjul Orchestra consists of 15 of the most well-merited musicians in Sweden.

The Stjärnjul-chorus is made up of two choruses. Rönninge Show Chorus, a world-class competitive female barbershop chorus led by Anna Alvring and Britt-Heléne Bonnedahl, founded 1983. They have have won three world championships hosted by Sweet Adelines and holds the title “2014, 2017 & 2020 International Champion Chorus”. Rönninge Show Chorus has performed on stages around the globe, including at the Gasteig (Symphony Hall) in Munich, the MGM Grand Garden Arena in Las Vegas, and Carnegie Hall in New York City.

Get your ticket now, here! If you are not in Sweden - this performance provides a lovely excuse to visit Sweden in all its northern winter glory.