Barbershop is a distinctive style of four-part a cappella music, featuring close vocal harmonies where all parts play a unique and equal role. Barbershop originated in the U.S. at the beginning of the 20th century by men waiting for their turn at barbershops, where they in order to kill time, began to sing and harmonize. Traditionally, the repertoire consists of well-known songs from the 20's and 30's but newer, contemporary songs arranged in barbershop style are also often performed.

The Swedish Rönninge Show Chorus, comprised of about 130 women, is one of the largest and most successful barbershop choruses in Scandinavia and is the reigning World Champions in the Sweet Adelines International Competition (2104) - one of the world's largest singing organizations for women. On November 1, the group is joined by Swedish barbershop groups Ringmasters, the Growing Girls and the Vocality quartet, while American performers include Tim Waurick, New York men's barbershop chorus Voices of Gotham, and hosts David and Sandi Wright. 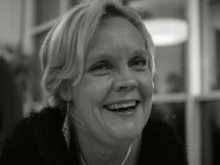 Do you want to book a world class show chorus for your party or event, or do you need outstanding music in your production? Rönninge... Visa mer