With the closure of the Budget Terminal (BT) at Singapore Changi Airport on 25 September 2012, airlines currently operating at the terminal –  Berjaya Air, Cebu Pacific, Firefly, Mandala Airlines, South East Asian Airlines and Tiger Airways – will move their operations to Terminal 2 on that day.

Changi Airport Group (CAG) has implemented measures to ensure a smooth transition for the airlines while passenger facilities at Terminal 2 are undergoing upgrading works so that service levels will continue to be high.  CAG has actively engaged its airline partners to prepare for the move.  This has included ensuring that ground handlers and service staff are trained and ready to operate in the new terminal.  Since April 2012, CAG has also reassigned the check-in counters for existing carriers in Terminal 2 to accommodate the BT airlines.

Improvements are being made to key touch points in Terminal 2 to enhance the travelling experience for passengers.  For example, the Departure and Arrival Immigration areas are currently being upgraded to increase the number of automated immigration gantries.  In addition, the taxi waiting area in the Arrival Hall will be expanded and additional taxi bays will also be constructed.

With more passengers expected to come through Terminal 2, plans are also in place to boost the manpower of ancillary service providers such as trolley retrievers, taxi coordinators and cleaners.  CAG is also working with key partners such as the Immigration & Checkpoints Authority of Singapore, Singapore Customs and Certis CISCO to ensure adequate manning, especially during peak hours.

Mr Yeo Kia Thye, CAG’s Senior Vice President for Airport Operations, said, “As with all transitions, there may be initial teething issues and we do ask passengers to be patient with us.  We highly recommend that in the initial days following the move to Terminal 2, passengers arrive at the airport early for their flight.

“We would like to thank everyone in the airport community who has been involved in the planning and preparations for this exercise.  With the strong support and commitment of our airport partners, we are well placed to ensure as smooth a transition as possible.”

The BT will cease operations at 2.00 am on 25 September 2012.  Flights of BT airlines departing and arriving after this time will use Terminal 2.  For the latest flight information, passengers should check www.changiairport.com, iChangi mobile app, Teletax or contact the Changi Contact Centre on +65 6595 6868.

The revised check-in row allocation for airlines operating in Terminal 2 and flight details of BT airlines departing and arriving around 2.00am on 25 September 2012 can be found in the document link below.

Changi Airport (www.changiairport.com) is the world’s most awarded airport having garnered more than 400 accolades since it opened in 1981. To serve passengers and visitors from the world over, there are 360 retail stores and 130 F&B outlets across the airport's four terminals.  Changi handled more than 46 million passenger movements in 2011, an annual record.  Today, it serves some 100 airlines flying to over 220 cities in about 60 countries and territories worldwide.  A flight takes off or lands at Changi roughly once every 100 seconds.

Changi Airport Group (CAG) today announced that it will close Singapore Changi Airport’s Budget Terminal on 25 September 2012. The terminal will be demolished to make way for the construction of a larger passenger building so as to cater to the continued growth of air traffic at Changi Airport and further strengthen Singapore’s air hub status. 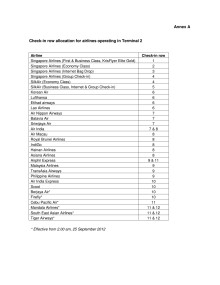 Tables showing the revised check-in row allocation for airlines operating in Terminal 2 and flight details of Budget Terminal airlines departing and arriving around 2.00am on 25 September 2012.