What is QA Testing and Why Do We Need It?

Does my software have any bugs or issues? This is probably the most frequently asked question when developing a new product – and if it’s not, then it should be. That’s how important quality assurance is.

In times when products are so similar that you can barely tell which one’s the best and competitors are just one click away, a bug-free digital product becomes essential and makes all the difference between that sought-after conversion and an abandoned shopping cart (you know that cart with the one wheel that never works, that someone leaves in the middle of the parking lot).

Because of its importance, QA testing is the first topic that Philipp, our Co-Founder and CEO, discusses in our masterclass in cooperation with Business Reporter.

Get a sneak-peek of the video here:

As mentioned in the beginning, the first thing you surely want to know is if your product is bug-free. Let me tell you – it never is. However, there are several different tests that can be run to ensure the quality of your digital product. I’m not going to name all of them, but rather have a closer look at some of the most common ones.

As the name suggests, the exploratory bug test is – wait for it – exploratory! 😱 It lets the testers freely explore your website, app, or any other digital product. Of course, they do get predefined tasks – but how to complete them is up to each tester. It’s not uncommon for testers to find ways of thinking and doing things that you and your developers never would’ve thought of.
An exploratory bug test gives you invaluable insights into the behaviour of your target group.

Structured Bug Test – Step by Step on the Way to Excellence

Here, the name also indicates a lot already. Instead of letting testers perform the predefined tasks freely, almost every click in a structured bug test is predefined and planned. This is particularly suitable when you’re integrating a new feature for example, and want to make sure that everything else is still working as it should. Or if you want to find out if a certain bug has been fixed successfully.

As you might’ve figured out already, a structured bug test is especially useful when you want to evaluate the core functions of your software.

Localisation Tests – For A Digital World

How can I find out if my product made for Germany works in China as well? Are those Chinese texts translated correctly or does my tutorial ask users to punch me instead of filling out their coupon number?
Questions like these might pop up at some point because with globalisation and digitalisation, the whole world is just a digital stone’s throw away. This is when localisation testing comes into the spotlight. Who better to tell you if your product is working on a Chinese smartphone and if the translation is free from mistakes and cultural faux pas, than a Chinese end-user?

Now that we’ve heard about different forms of quality assurance we’re ready to go – aren’t we? Well, I guess you know the game – no solution without a BUT. Of course, there are some pitfalls you have to consider when planning your first, or second, or hundredth, QA test. 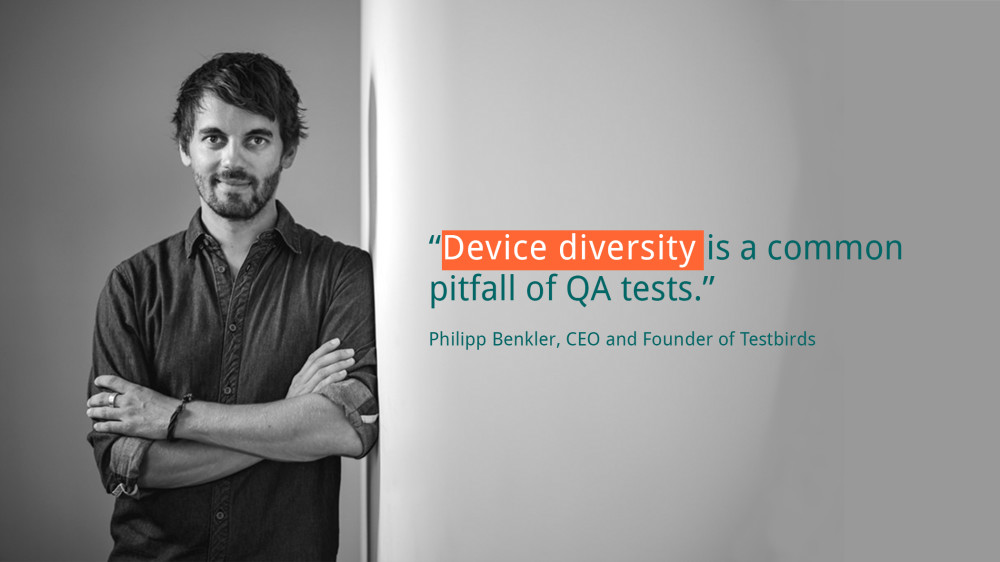 I’m sure some developers wish they could go back in time – to those good old days when there was just a handful of devices out there when Windows was the one and only operating system, and nobody had even heard of wearables or Internet-of-Things.
Not because they don’t love tech – I’m sure they do – but let’s be honest: developing was a lot easier back then. Nowadays, you have to code software that runs on any possible combination of operating systems, software versions, and devices.

After coding comes testing. It’s impossible to have all devices with all OS and different versions on hand. Even if you did, it would take ages to test each and every combination. How do you deal with that? I’ll give you a hint – It starts with “Crowd” and ends with “testing”, but we’ll get to that soon enough.

There’s another aspect besides the endless variety of different devices – it’s called operational blindness, a.k.a. the need to involve real end-users. Of course, it’s very important to have testing experts that are conversant with finding bugs and defects in digital products. Nevertheless, you should never forget who you’re building your product or service for – your end-users. When it comes to how they use digital products, there’s a huge difference between a tech enthusiast or a 70-year-old whose first TV was black and white. (And no, that’s not meant to be mean, it’s just a fact we have to keep in mind when we think about users.) You might already have a guess as to what could help you overcome this obstacle 😉

So, we’ve heard about the different forms of quality assurance tests and about the difficulties that come with quality assurance testing. Are you ready for an innovative way to conduct successful QA tests? Because here comes the big reveal!
As already implied – Crowdtesting is the answer.
Imagine if you could get access to more than 400,000 testers all over the world, with more than 900,000 devices at their fingertips. And to make it even better, imagine you could group them using 65 demographic criteria so they exactly represent your target group. Wouldn’t that be just lovely? Well, with Crowdtesting you can (surprise!).
With those 900,000+ devices, device diversity isn’t an issue anymore. Instead of using emulators or virtual machines, you can let real end-users test your website, app, chatbot, or IoT-device, and combine testing with feedback from your specific target group. Say goodbye to operational blindness and start developing products your users really love.

Are you interested in learning more about QA, UX, and Crowdtesting, now? Watch our masterclass with Founder and CEO Philipp Benkler!

Testbirds was founded in 2011 by Philipp Benkler, Georg Hansbauer and Markus Steinhauser. Today, the company has over 100 employees with offices in London, Munich, Amsterdam and Stockholm. The company also has franchises in Eastern Europe and a sales partners in Italy. Under the slogan, “Testing Reality – Real Users. Real Devices. Real Time.”, Testbirds investigates software for user-friendliness and functionality issues through the use of crowd and cloud based technologies. With over 300,000 registered testers located in 193 countries, Testbirds is one of the world’s leading crowdtesting providers. The company also utilises cloud based technologies to support customers in optimising their digital products. The combination of the two testing methods delivers a unique portfolio that aims to take the quality of software to the next level.

For its innovative approach to software testing, Testbirds has received many awards. Recently, the company won the German Innovation Award 2017, and was shortlisted for the Digital Top 50 of 2016, as one of the Top 10 European B2B Scale-ups, according to Google and McKinsey. In the past, Testbirds also won the start-up competition, “IKT-Innovativ”, the Best-of-mobile Awards 2013 and the IT-INNOVATION Award 2014. As BITKOM partner Testbirds actively participates in diverse committees. When founded and during further development of its portfolio, Testbirds was funded by the Federal Ministry of Economics and Energy. The company shows social responsibility through its initiative towards fair working conditions in the crowdsourcing industry. More information about this can be found at http://www.crowdsourcing-code.com/.