HEATWAVE is a collective of friends, music lovers and artists, that have come together to promote the best of rock’n’roll, indie, punk and related musical styles that the planet has to offer. Whilst primarily based in London, they boast contributors from across the globe who leave no stone unturned in finding the coolest new bands. HEATWAVE is now gearing up to put out their fourth edition and will launch it with a fun punk rock’n’roll party in London on Saturday 1 April.

London is becoming a second home to Swiss band THE JACKETS it seems these days, so popular are they with the denizens of this town. Combining sixties garage, mod, '77 punk rock, psychedelia and their devotion to bands like MC5, The Monks, and The Music Machine, The Jackets bring a dynamic recipe to the garage rock'n'roll menu. What is important to note is that the Jackets are a rock’n’roll band - but it's the roll that makes the rock just that little bit better!

Opening the live music for the evening are New Zealand quartet THE CAVEMEN, who made London their home late in 2015 and have so far hit the ground running, with their second album coming out last year on local and international label Dirty Water Records. These Auckland kids really hit town with a bang! Heatwave’s Penelope York wrote: ‘Listening to their debut self-titled album is like being in my own pit, surrounded by savage ghosts from former gigs'. 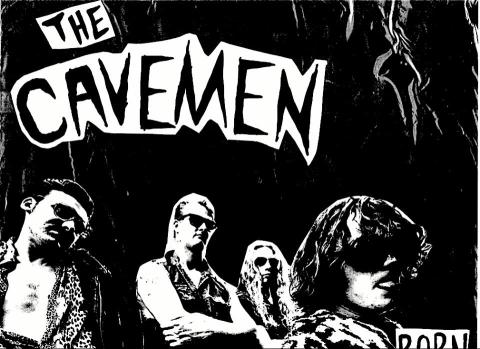 ' I can almost smell the sex, drugs and rock’n’roll infused sweat and the rotten beer on the floor... While their sound has many great influences – The Gun Club, Sonics, Cramps, Stooges, Gories, Flat Duo Jets, and even Dead Moon, it is their own sound. Their sound is brought mainly through their raving attitude... The Cavemen are definitely a live band, so make sure you see them.’

Also on hand to keep the music non stop will be DJs John The Revelator (a Dirty Water Club regular) and Afonso (from The Parkinsons) who will have you dancing until your body is only bones!

This is pretty much certain to be a sell-out so punters are advised to your tickets in advance!

​In New Zealand you don't give yourself a band name like The Cavemen lightly. You’re setting out your stall for all to see. In polite company, any mention of these infamous Auckland punks register merely cold stares and hushed voices. The group themselves even claim to be a ‘great band to clear a party’.

​THE CAVEMEN came over to London from their native Auckland, New Zealand – “because those rednecks there wanted to lynch us” – with the aim of simply going hell for leather.

Too stupid to live? The Cavemen (NZ) top themselves with "Too High To Die" - new single & video release

The Cavemen (NZ) offers a comically nasty, nihilistic take on '77 punk rock, turbocharged with the attack of early '80s US hardcore and laced with the fuzz pedal-enhanced 'whoop-it-up' wildness of your favourite garage rockers from The Sonics to Mudhoney.

SUFFERING FROM DECLINING MENTAL health? Feeling sexually frustrated? Plagued by homicidal thoughts? We have the pill that’ll push you over the edge..

It has been a busy year for New Zealanders The Cavemen from just releases alone. Now the quartet of vocalist Paul, guitarist Jack, bassist Nick, and drummer Jake Caveman have freed a new video offering ahead of their new album.

Dirty Water Records are re-releasing that first record that jettisoned the band from antipodean obscurity to European dive-bar notoriety. Purveyors of taste beware! The 180 gram re-issue will be packed with added delinquency in the form of two bonus tracks and a limited run of blood-red vinyl.

​​"The Cavemen are as filthy as they are prolific," says Heatwave Magazine. After many 7-inches and two albums in just over a year, the band are ready to spread the hate all over the world.